Ghana Is Leading the Way for Democracy in Africa 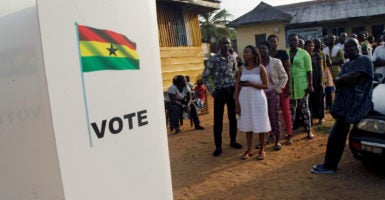 Ghana, a West African country, has experienced peaceful transitions of power each time there has been a change in government since the country ended military rule in 1992.

Solidifying its notable status as one of Africa’s most stable democracies, Ghana is about to embark on another handover of power from the sitting head of state to the candidate of a longtime opposition party who won the recent presidential poll.

In a testament to Ghana’s functioning democracy, the country’s outgoing president, John Mahama, who fought hard for re-election, said during his farewell state of the nation address:

I stand here today, Mr. Speaker, holding the baton of leadership prepared to pass it on with pride, goodwill, and determination to Nana Akufo-Addo and to ask all Ghanaians to cheer him on as he runs his portion of this important relay for Ghana.

The president-elect, Akufo-Addo, former attorney general and foreign minister of the county who emerged victorious in his third presidential attempt, will be sworn in as Ghana’s new president on Jan. 7.

In fact, The Heritage Foundation had a unique opportunity to welcome then-presidential candidate Akufo-Addo to Washington and hear about his vision for Ghana in October 2015.

Akufo-Addo remarked in his speech,

I thank The Heritage Foundation for inviting me to speak at one of Washington’s most celebrated centers of thought and intellectual endeavor. It is an honor to be here in such company and to see so many people eager to discuss the future of my country, Ghana, and Africa more broadly … I remain staunchly optimistic about our future. I am proud to be a Ghanaian, the people who were the first in sub-Saharan Africa to free themselves from colonial rule, and who remain the pace-setters in the development of the principles of democratic accountability, respect for human rights, and the rule of law on the African continent. And as we move toward another election, I am reminded—and proud—of how hard we have fought for our democracy.

During his presidential campaign, Akufo-Addo highlighted the damaging effects of government corruption in Ghana and plans to tackle the issue by strengthening the judiciary and enacting constitutional reforms to decentralize power from the executive branch.

At The Heritage Foundation event last year, Akufo-Addo also emphasized that “[t]here is a connection between poor democracy and poor economic performance. Short-termism and political expediency in regard to elections tend to correlate with a lack of vision and incompetence in the economic field.”

In addition to strengthening the rule of law, Akufo-Addo’s vision for Ghana includes reforms in three key areas to transform the economy and set out a path to growth: pursuing economic diversification, unleashing the private sector from burdensome regulation and excessive taxation, and reining in the national debt.

As Ghanaians welcome and embrace this new presidency, Akufo-Addo should follow through with these reforms to enhance Ghana’s economic freedom and advance opportunities for all Ghanaians.