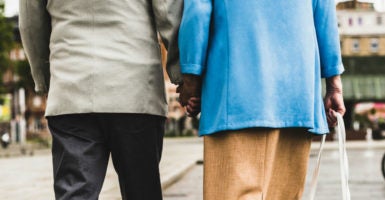 Couples who marry would lose all or some of their welfare benefits because their combined income is often greater than each of their independent incomes. (Photo: Uwe Umstätter /Westend61 GmbH /Newscom)

Paul Draper is a member of the Young Leaders Program at The Heritage Foundation.

According to a recently released study from the American Enterprise Institute, 82 percent of lower-middle-class families with young children face “marriage penalties” in the welfare system.

Couples who marry would lose all or some of their welfare benefits because their combined income is often greater than each of their independent incomes.

The study found that couples with young children are less likely to marry if they face a significant marriage penalty. Furthermore, nearly a third of Americans between the ages of 18 and 60 reported that they personally know someone who has chosen not to marry because of the marriage penalty.

And this study only examines welfare marriage penalties for a few means-tested welfare programs: food stamps, Medicaid, and Temporary Assistance for Needy Families. There are over 80 means-tested welfare programs that provide other food, medical, and cash assistance, as well as housing assistance and social services to poor and lower-income Americans. Marriage penalties exist throughout the welfare system.

Marriage is one of the greatest protectors against child poverty. It is counterintuitive to have a welfare system that penalizes this institution.

Children in married-parent homes are more than 80 percent less likely to be poor, compared to their peers in single-parent families. Tragically, far too many American children live in single-parent homes. One in four children is born to an unwed mother, and more than half of U.S. teenagers aged 15 to 17 live without married parents.

Children in married-parent homes are more than 80 percent less likely to be poor, compared to their peers in single-parent families.

How can we reform our welfare system so that it does not penalize marriage?

First, policymakers must avoid policy changes that would increase marriage penalties. This would include preventing increases in the earned income tax credit for childless adults. Such an increase would only further incentivize parents to remain single.

Second, we should implement stronger work requirements to decrease the appeal of welfare as a long-term substitution for both work and marriage. Fostering a sense of self-reliance and pride in one’s work encourages parents to move away from welfare and toward the kind of financial independence found in marriage. This, in turn, results in greater economic opportunities for both parent and child.

Marriage is a strong tool against poverty and also provides the best setting for children to thrive. Policymakers have an opportunity to improve conditions for the American family. They must work toward reducing and eliminating the anti-marriage policies of the current welfare system.