Welfare Currently Punishes Work and Marriage. This Bill Would End That. 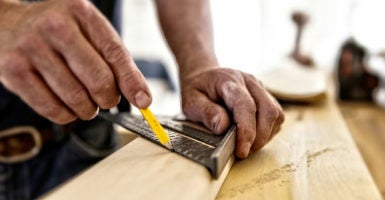 The Welfare Reform and Upward Mobility Act would restore the vital link between work and assistance. (Photo: iStock Photos)

There is much to celebrate in America today. Americans are, on average, wealthier, healthier, and better educated than we ever have been.

We’ve made huge strides in civil rights and racial equality. And we have access to technology that would have awed past generations.

But fundamentally, our culture and way of life has undergone some changes that are not necessarily positive.

As documented in the recently released report, “What We Do Together: The State of Associational Life in America,” Americans’ day-to-day lives have significantly changed over the last few decades—and not always for the better.

Between 1970 and 2016, the share of children not being raised by two parents rose from 15 to 31 percent. Over that same time, births to single mothers rose from 11 percent to 40 percent.

And more than half of American children now live with a single parent at some point before they turn 16.

This breakdown of the American family has real economic and social consequences for all of us. On average, children from married households live healthier lives, attain higher levels of education, earn more, and enjoy greater wealth as adults than children from single-parent households.

As the American family has been weakening, our attachment to work has been fraying for many as well.

Between 1970 and 2016, labor force participation for prime-working-age men declined from 96 percent to 89 percent. The fall-off has been worse for men with little education, who now put in 14 percent fewer hours at work in 2012 than they did in the mid-1970s.

There is no silver-bullet solution to these problems. The causes are cultural, economic, and policy related. What we do know is that at a bare minimum, government should not be actively making these problems worse.

Unfortunately, some of our current welfare policies are doing just that, which is why I introduced the Welfare Reform and Upward Mobility Act last month.

Prior to the Obama administration, the size of the federal government’s food stamp program ebbed and flowed with the economy. The number of recipients went up during recessions and fell during recoveries.

But President Barack Obama ended the link between work and food stamp eligibility. As a result, today’s food stamp program foots the bill for 44 million people, compared to just 26 million before the recession.

The Welfare Reform and Upward Mobility Act would restore that link between work and assistance by creating a 100-hour-per-month work requirement for able-bodied adults without dependents.

Single parents with a child younger than 6 would be exempt from penalties, but they would still be guaranteed access to all vocational opportunities offered by the state.

Finally, to make sure that current food stamp recipients are assisted in their search for work, states would also be given $500 million to help develop vocational programs for those who have trouble finding work.

The era of signing citizens up for assistance and then neglecting the next step must end.

The bill would also allow married parents with children to split the work requirement between them, thus making it easier for married parents to balance work and family.

These are admittedly small steps. Much more can be done to end the many ways federal policies currently punish work and marriage through the tax code, health policy, and housing assistance.

But we can start by removing some of the barriers that make family and work life more difficult. And this bill, the Welfare Reform and Upward Mobility Act, would start making that happen.