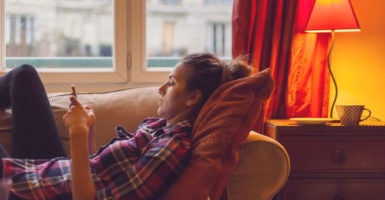 Many of America's ostensibly economic problems reflect the withering of our associational life. (Photo: iStock Photos)

Our nation, today, faces very real economic challenges. Economic growth during the recovery has been meager and uneven.

The U.S. economy has become less dynamic and innovative in recent decades. We miss the strong productivity growth America enjoyed in the mid-20th century and the unusually large wage gains it brought.

However, in historical and comparative perspective, most Americans enjoy unprecedented material living standards. Our economic problems often take the form of unsatisfactory rates of improvement—we are growing richer less quickly than we did when we were poorer.

Nevertheless, many Americans—poor, middle class, and wealthy—feel that something is amiss. It is a feeling that cannot be reduced to economic anxiety. Rather, there is a sense that our social fabric is fraying.

And these concerns are reflected in objective measures of family and community health.

To cite just a few of the trends that may be grouped under the rubric of “social capital”: marriage and churchgoing have declined, distrust of the nation’s institutions has grown, mixed-income neighborhoods have become rarer, regional polarization has increased, and young men who are neither working nor looking for work have become more numerous and more isolated.

We do less together than in the past, and we are worse off for it, economically and otherwise. To better document and explore these issues, I released a report Monday titled “What We Do Together,” which was then the topic of a Joint Economic Committee hearing Wednesday.

This report and hearing are just the beginning of a multiyear research effort we are calling the Social Capital Project.

An emphasis on social capital complements the economic lens through which we typically view national challenges today. Many of our ostensibly economic problems reflect the withering of our associational life.

For example, the fragility of so many families today reduces upward mobility. And diminishing trust has implications for the decline in business dynamism, since risk-taking requires confidence in each other and our institutions.

Economic trends, in turn, affect the extent to which we cooperate to achieve our desired ends.

Our first report, “What We Do Together,” concludes that rising affluence has reduced the economic necessity of having close ties with neighbors and traditional institutions. It also highlights the extent to which the growth in two-worker families has affected investment in social capital.

These economic changes have conferred valuable benefits, but by depleting social capital, they have also come with costs. This first report does not identify a legislative agenda to address these problems, but Robert Putnam, author of “Bowling Alone,” suggested a possible direction to look at the close of Wednesday’s hearing.

I do think that this problem, if it is 2020 and we have turned this around, the first signs will be at the state and local level around America. That’s where America in the past has fixed its problems. … Now will all the problems be completely solved at the local level? Absolutely not. … But I am saying that is where I would look for opportunities for making real progress.

As our Social Capital Project continues, I will work to ensure that the federal government is breaking down, rather than building up, barriers that prevent our local communities from tackling these problems head on.