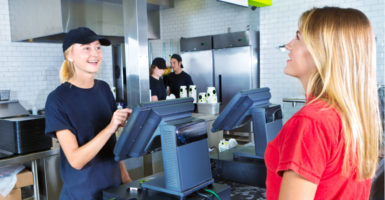 Democrats’ family leave bill would fail to benefit most employees who need it and leave policymakers with a choice between rationed benefits or massive tax hikes, according to the Congressional Budget Office. (Photo: Getty Images)

If liberals want to provide access to paid family and medical leave, they need to come up with a better solution than they have so far.

According to a recent analysis from the Congressional Budget Office, Democrats’ proposed Family and Medical Leave Insurance Act would fail to benefit most of the workers who need it and leave policymakers with a choice between rationed benefits or massive tax hikes.

That’s because, according to the CBO analysis, the new payroll tax revenues proposed to fund the initiative would fall short of the program’s expenses just one year after benefits were to begin.

As more and more people applied for benefits, the so-called FAMILY Act’s costs would soar to 240% of the program’s tax revenues in 2028, just six years after benefits are slated to start.

But because the legislation sets up a new unfunded entitlement program, Congress either would have to ration benefits—limiting who could take leave, for how long they could take it, and the amount of benefits they could receive—or else raise taxes.

The legislation is being sold to Americans as costing a “cup of coffee a week,” but it could end up costing a tank of gas instead. According to the American Action Forum, a federal paid family leave program would cost the average American approximately $1,500 a year.

If you think that’s an exaggeration, America’s first entitlement program—Social Security—started out as a 2% payroll tax. Today, it’s 12.4%. And by 2040, it will have to be 16.6% to pay scheduled benefits.

The pain of higher taxes would be worst for low-income workers and families who, evidence shows, tend to lose more than they gain from government-paid family leave programs.

There are many reasons for that reality, including lower awareness of the programs, inability to make ends meet with partial benefits (such as the FAMILY Act’s 66% benefit level), lower eligibility for government benefits, and rigid rules and administrative barriers.

Consequently, government-run paid family leave programs are regressive, redistributing resources from low-income workers and families to middle- and high-income ones:

The FAMILY Act’s provisions would fail to meet most workers’ leave needs, particularly those in the lowest income brackets. Moreover, it would provide windfall benefits to employers and workers who already provide and have access to paid family leave.

Increasingly, employers are providing paid family and medical leave because their workers want it. With a strong economy and competitive labor market, employers find they can lose good workers and incur high turnover costs if they don’t provide paid leave.

Instead of implementing a one-size-fits-all federal program, policymakers should seek to build upon the recent increase in more flexible, generous, and accommodating employer-provided policies.

One way to do that is through the Working Families Flexibility Act, which allows employers to give lower-wage, hourly workers the choice of accumulating “comp time” instead of pay for their overtime hours.

If lawmakers want to help with family leave, they should reject the FAMILY Act, which would cost too much, serve too few, and become more of a burden on taxpayers over time.

Instead, they should take a closer look at the Working Families Flexibility Act and other measures that would encourage more flexible and accommodating leave options.