‘Like Hogs at the Trough,’ Lobbyists Feast on Farm Bill for Subsidies, Food Stamps 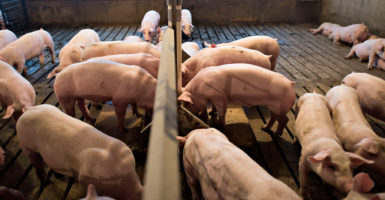 Conaway, a Texas Republican, told reporters last week that he already looks forward to working closely with Peterson, a Minnesota Democrat, to craft the 2018 farm bill.

Conaway’s office insists his visit with Peterson in Willmar, Minnesota, is just an example of how the Agriculture Committee is a bipartisan oasis in an otherwise gridlocked Congress.

Some Republican aides, operatives, and members disagree. The episode, they tell The Daily Signal, demonstrates how the Agriculture Committee has become an overgrown briar patch of special interests.

“It’s why a lot of people are frustrated with politics; there’s a system in place to protect the status quo,” Rep. Marlin Stutzman, R-Ind., himself a farmer, said.

While traditional partisan politics haven’t taken root in the Agriculture Committee, Stutzman, who used to serve on the committee but will leave Congress at the end of this term, says a different kind of special interest dominates under the guise of interparty cooperation.

“The committee says that they’re bipartisan, but that’s because of the farm bill and the unholy alliance between agriculture policy and food stamps,” Stutzman said. “Both Republicans and Democrats get what they want out of a trillion-dollar spending bill and it’s a problem. It’s a bipartisan rip-off.”

A legislative juggernaut, the farm bill wraps together both agricultural and nutritional programs, with the latter meaning food stamps. That combination, Stutzman explains, guarantees the support from Republicans in rural districts and Democrats in urban districts. First drafted as part of the New Deal in 1933, the farm bill was designed to give relief to struggling farmers during the Great Depression. The legislation has been reauthorized about every five years and has expanded ever since.

Critics of the farm bill say that a closer look at the spending proves that the legislation’s name is a misnomer.

“The farm bill should really be called the ‘food stamp’ bill,” Daren Bakst, a research fellow in agriculture policy at The Heritage Foundation, said, pointing to the bill’s spending breakdown.

While the farm bill contains provisions for crop insurance and price supports, according to the Congressional Budget Office nearly 80 percent of the funding goes to the Supplemental Nutrition Assistance Program, more commonly known as food stamps.

Agriculture interest groups, who represent every sector from cattle ranchers to wheat farmers, lobby lawmakers for the remaining funds.

“To be honest, K Street lobbyists have christened that unholy alliance because of both parties,” Stutzman said of the bill’s treatment of food stamps and farm supports. “It’s like hogs at the trough: You get what you want, then we will make sure they get what they want.”

Because the interests of agriculture can be provincial, depending on where crops are grown, the policy package comes with a special set of political rules.

“Look, these guys are from rural districts with heavy agriculture bases,” a senior Republican staffer said of the Agriculture Committee’s membership. “They want their subsidies generous and their products protected.”

And those interests often trump all other factors, the aide said, explaining in part why Conaway might cross party lines to appear with Peterson in Minnesota. “The region and the parochial interests are so inherent to the committee that the bills that come out of the committee don’t generally reflect ideology or party considerations.”

First, the conservative lost his spot on the Agriculture Committee after he bucked leadership under then-Speaker John Boehner and voted against the 2014 farm bill. Next, farm groups and the U.S. Chamber of Commerce helped oust Huelskamp in the Aug. 2 primary election by arguing that without a spot on the committee, he couldn’t represent Kansans.

Stutzman attributed Huelskamp’s loss to the combined work of the GOP’s old guard and a posse of agriculture interests—“the chamber, old John Boehner staffers, and the ethanol crowd.”

Conservatives have long advocated splitting food stamps out of the farm bill. The combination, they argue, allows mutually assured and unaccountable growth in both programs.

Stutzman led a failed charge for the separation in 2013 and the Republican Party platform calls officially for the split.

But during his visit to Peterson’s district, Conaway seemed hesitant to embrace his party’s platform position. In a moment of possible foreshadowing, the chairman told Minnesotans he is concerned that any change in food policy could harm low-income Americans.

That’s encouraging news for Minnesota Farm Bureau President Kevin Paap, whose organization helped plough under the separation of food stamp and farm policy in 2013.  He heralded the special relationship between Conaway and Peterson that’s been sown by farm policy.

“There’s not enough of us in agriculture,” Paap told the Morris Sun Tribune. “We can’t be fighting in the family.”