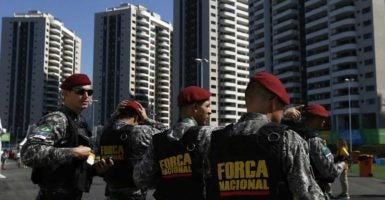 On average, 15 foreign tourists have been victimized every day in Rio since the athlete’s village was opened on July 24. (Photo: Marcelo Sayão/EFE/Newscom)

Gabriel de Arruda Castro is a member of the Young Leaders Program at The Heritage Foundation.

Much has been said about the risks Zika virus presents to tourists and athletes visiting Rio de Janeiro for the Olympics. Several competitors decided to skip the games because of the epidemic. But the fact is, crime is a much bigger threat, and the numbers prove that.

It is winter in the Southern Hemisphere, and the number of reported Zika cases has fallen about 90 percent in comparison to six months ago. Also, researchers at the University of São Paulo have just confirmed previous studies and concluded that only three or four of the expected 500,000 foreign tourists will get sick because of Zika. The same cannot be said of the urban violence in Rio.

Crime rates are surging in Rio—especially in the shanty towns or “favelas” controlled by heavily armed criminal groups. The main concern is burglary and robbery. According to the Brazilian government, there were 98,038 cases of such crimes in the first six months of 2016 in Rio. That average represents more than 3,000 cases per 100,000 inhabitants per year. Worse than that: 31 people were killed this year during robbery attempts.

For the criminals, the games started way before this Friday’s ceremony.

Two men armed with guns robbed an Olympic athlete from the Australian Paralympic team. Criminals stole $400, 000 worth of equipment from a German TV crew. An Australian news team was attacked on the famed Copacabana beach. A Chinese athlete and cameraman had their equipment stolen from their hotel. And a New Zealand athlete didn’t know who to call after being abducted by two armed gunmen dressed in police uniforms, who forced him to withdraw cash from several ATMs.

International visitors are usually the preferred targets of Rio’s criminals. A Brazilian newspaper dove into the statistics and found out that, on average, 15 foreign tourists have been victimized every day since the athlete’s village was opened on July 24.

It is imperative to say Rio is not a lawless land. The city’s official murder rate is at 19.2 per 100,000 inhabitants per year (and going down), comparable to places like Atlanta and Cincinnati—not safe, but far less violent than Detroit and Baltimore, and incomparably better than Caracas, Venezuela, which has the highest global homicide rates.

Also, there is hope that the massive international effort of security forces—including the respected Brazilian police and armed forces—will reduce risks for tourists and athletes.

Rio may not be the best environment for the Olympics, but it could be worse.

Until a few months ago, there was concern about the stability of Brazil, which is still in the midst of political crisis and profound economic recession.

Political unrest has been constant in Brazil in the last months, following a corruption scandal that led to massive demonstrations and culminated with the impeachment of President Dilma Rousseff. Prospects for the future look promising as the interim president, Michel Temer, is a moderate, unlike his socialist predecessor.

Of course, as with many major international sporting events, there is the threat of terrorism. While there is a massive international effort in place to secure Rio, security will be on high alert for Aug. 5-21.

As The Heritage Foundation scholar and retired Army Green Beret Steve Bucci explained, “Since Palestinian terrorists disrupted the 1972 Munich Games, the Olympics also have meant something else. Every country that wins the opportunity to host the games also has a herculean security challenge. This year is perhaps the most challenging to date.”

So far, Brazil appears to be meeting the challenge. To date, “Brazil already has rounded up 12 terror suspects in multiple operations, all thought to be planning attacks on the Summer Games.”

There is no doubt the Summer Games come at a very difficult time for Brazil, but doomsday predictions are counterproductive. We should celebrate this global sporting event and pray it is a success.