Facing the Terror Threat at the Olympic Games in Rio 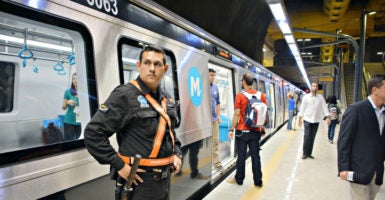 A security guard stands duty July 30, 2016, at a station on the new subway line built for the Olympic Games in Rio de Janeiro. Set for Aug. 5-21, the games come amid a run of international terror. (Photo: Kyodo/Newscom)

The Olympic Games are supposed to be a celebration of sport, international good will, and man’s ability to transcend conflict. They are what Gen. Douglas MacArthur called “the fields of friendly strife.”

Yet, since Palestinian terrorists disrupted the 1972 Munich Games, the Olympics also have meant something else. Every country that wins the opportunity to host the games also has a herculean security challenge.

This year is perhaps the most challenging to date.

The Rio de Janeiro Games, set for Aug. 5-21, come after one of the worst runs of international terror any of us has ever seen. Terrorists have struck this year in France, Germany, America, Iraq, Turkey, Syria, multiple sites in Africa, and in Asia.

Their targets are diverse, but have three common characteristics: soft, symbolic, and spectacular.

Soft as in light security to overcome and difficult for the “good guys” to successfully protect.

Symbolic in that the target means something positive to the rest of us, and is therefore hateful to the perpetrators.

Spectacular in that the guarantee of significant media coverage will relay the message of hate to a wide audience, affecting more people than the physical victims.

The Brazilians will have their best assets providing security at the Rio Games, and they have the benefit of the advice and counsel of the world’s best counterterror experts.

America’s FBI and Joint Special Operations Command, Britain’s Special Air Service, and Germany’s GSG9 (the anti-terror unit formed in response to the Munich tragedy) all will provide assistance. As will regional friends of Brazil, and the best intelligence agencies in the world.

Brazil already has rounded up 12 suspects in multiple operations, all thought to be planning attacks on the Summer Games. That’s a good start. It’s necessary to take the known threats off the board.

However, that is not enough. What about the unknowns?

To mitigate them, screenings, metal detectors, and undercover operatives will be everywhere. Uniformed military and police will provide as big a deterrent as possible, using sensors for bombs, bio-weapons, and chemicals, plus those ever-present and effective dogs.

The bottom line is that the best security methodologies, assets, and operators will be used to secure the games.

Those attending the Summer Games also must play a role. Since the venues are spread out, the routes between them will be targets. The security forces will need the eyes, ears, and senses of every person of good will to augment their efforts.

The civilized world is praying for Brazil. Sadly, others are praying that killers will get through.

As has been said, the protectors have to be right everywhere, all the time, and in every case; the killers need to be “right” only once.

We’re pulling for Rio to be safe and a smashing success.