Medicare’s Next 50 Years: Fix the Problems and Improve the Program 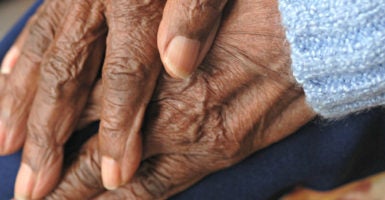 About 10,000 baby boomers turn age 65 every day, and Medicare will be inundated annually by millions of new retirees over the next 15 years. (Photo: Megan Daniels/Newscom)

While Americans understandably are preoccupied with a hot presidential race, the big policy problems loom regardless of the winner in November. And of all of the domestic issues, the future of Medicare is the biggest challenge facing the nation related to entitlement programs.

It’s a big task. Medicare covers 57.1 million souls. But 10,000 baby boomers are turning age 65 every day, and the program will be inundated annually by millions of new retirees over the next 15 years. By 2030, government actuaries expect over 81 million Americans will be enrolled in the program.

Regardless of the outcome of the presidential campaign, or what political candidates say or don’t say, pander or promise, Medicare’s growing challenges will get tougher.  The new president and Congress, and the taxpayers who elect them, will not be able to escape the costs or consequences of official inaction.

Medicare is big, costly, and complex. Its major problems have been persistent: burdensome and sluggish bureaucracy, big gaps in coverage, problems securing quality care, inefficient pricing of medical services, absurd restrictions on the personal freedom of patients, subversion of the professional independence of doctors, and disgraceful levels of waste, fraud, and abuse amounting to tens of billions of dollars annually.

Financing will be the biggest challenge. While senior citizens today are better off financially than ever before, they still live on fixed incomes and most are burdened with chronic illness such as heart disease, hypertension, and diabetes. Not surprisingly, the most costly 25 percent of Medicare patients account for more than four-fifths of the program’s spending.

>>> Read the Report: “Medicare’s Next 50 Years: Preserving the Program for Future Retirees“

Largely because of the miracles of modern medicine, seniors also are living much longer than they did in 1965, when Medicare was created. While this is indisputably great news, it also means that today’s taxpayers—who finance nearly all of Medicare’s benefits for today’s retirees—are going to be carrying an even bigger burden tomorrow.

How heavy? Consider the Medicare Trustees’ “medium range” estimates for the short term. In 2015, Medicare spent $648 billion. But by 2025, that spending will jump to almost $1.3 trillion.

America, with an annual economic growth rate of 2 percent, is not going to “grow” out of its entitlement crisis. Over the next 10 years, Medicare spending will outpace the growth in the general economy (as measured by gross domestic product, or GDP) and the federal budget. It also will surpass the growth of America’s total health spending or spending on private health insurance.

The slowdown in Medicare spending during the past few years, widely celebrated by health policy wonks, is over.

The Affordable Care Act, popularly known as Obamacare, contains 165 provisions affecting Medicare. The most significant are Medicare payment reductions that guarantee more headaches for doctors and other medical professionals.

This approach imposes other costs: It threatens seniors’ future access to medical care. There is a better way.

Medicare reforms are needed to secure value for patients, enhance the program’s solvency, and reduce its burden on current and future taxpayers. To accomplish these goals, Moffit prescribes a two-step process:

First, the new president and Congress should improve the traditional fee-for-service program. This can be done by simplifying it (combining Medicare Parts A and B) into a single plan with a single deductible, and adding protection against catastrophic illness. That would eliminate much of the confusing co-payment arrangements of today’s Medicare and reduce seniors’ current need to buy supplemental coverage and pay additional premiums.

Moffit also says that Congress needs to reduce further the taxpayers’ subsidies to the wealthiest retirees and gradually raise the normal age of Medicare eligibility from 65 to 68, tracking changes in older Americans’ longer life expectancy and capacity to stay active in the workplace.

Second, the new president and Congress need to inject a heavy dose of free market competition into the program to control costs while enhancing patient choice. This can be done by integrating traditional Medicare into a common, competitive program with Medicare Advantage, as well as other private health plans and employer-sponsored plans that cover retirees.

All plans would be required to meet basic standards and offer catastrophic coverage, and all would compete head-to-head on a level playing field. Intense competition in an environment where provider price and performance is transparent will control costs, spur innovation in health care delivery, and secure even higher levels of patient satisfaction.

Over the past 50 years, Medicare has chalked up an impressive track record of securing access to health coverage and a strong measure of financial security for America’s senior citizens.

For the next 50 years, the new president and Congress can begin to secure even greater value for patients for their Medicare dollars while easing the financial burdens of current and future taxpayers.

Moffit’s new report for Heritage provides a clear-eyed diagnosis of the huge program’s recurrent problems and offers sound remedies to achieve a better future for Medicare.