There’s Nothing New About the Green New Deal 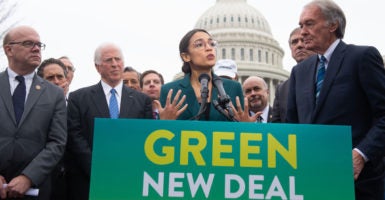 Democrats unveiled their latest version of the Green New Deal on Thursday, but despite some concessions to reality, this version is still little more than socialism masked as environmental policy.

It’s a modern rehash of the original New Deal of the 1930s, which, despite its success in increasing the size of government and distending the Constitution, had its excesses contained by the Supreme Court.

The Green New Deal, introduced by Rep. Alexandria Ocasio-Cortez, D-N.Y., and Sen. Ed Markey, D-Mass., is a little less aggressive in its calls to abolish the carbon economy than previous proposals. However, their nonbinding resolution still demands “net-zero greenhouse gas emissions” by 2030, among many other measures that ultimately would lead to a complete government takeover of the energy sector.

According to the climate activist website Generation Yes, net-zero emissions means “reducing the volume of greenhouse gas emissions that human activity releases into the atmosphere until our total output is no greater than the emissions we remove, through activities like planting carbon forests, reducing deforestation and using technologies like carbon capture and storage. So no more goes out than goes in = net zero.”

But how, exactly, we are to get to a net-zero emission economy when that goal is so far beyond the limits of current technology remains unexplained.

In the FAQ section of the resolution, Ocasio-Cortez and Markey address this problem with an, um, bizarre line: “We set a goal to get to net-zero, rather than zero emissions, in 10 years because we aren’t sure that we’ll be able to fully get rid of farting cows and airplanes that fast.”

Despite some trepidations about feasibility, Ocasio-Cortez and Markey will still try to abolish greenhouse gas emissions. For instance, by making air travel obsolete.

Are we really to believe that high-speed rail is going to grow to “a scale where air travel stops becoming necessary” within 10 years as the plan suggests?

Given the incredible cost and total failure of California’s “bullet train to nowhere,” a project that even the far-left website Mother Jones called “officially insane,” does it really seem likely that this idea will lead to a national panacea?

House Speaker Nancy Pelosi, D-Calif., even threw shade at the vague and dreamy nature of the proposal, which seems in some way more like a far-left piety test than serious policy.

At this time, the Green New Deal polls pretty well, even among Republicans, as Ocasio-Cortez is fond of pointing out. Yet, as with so many other issues, Americans tend to change their minds quickly when they learn how much a government program will cost them.

It’s important to note that, according to a report by NBC, polls show that Americans say they want to combat climate change, but aren’t willing to pay even $10 a month to do so.

The truth is, the Green New Deal is still quite radical, and despite growing support within the ranks of the Democrat Party, it likely would be unpalatable to the American people once they figure out exactly what it is.

And it would be costly.

The Green New Deal’s aggressive agenda to “green” every building in America, provide health care for all, and guarantee a job for every American will cost taxpayers tens of trillions of dollars and require an exponential enlargement of the federal budget, which already relies heavily on borrowing and piling up debt.

In just the past decade alone, the national debt has more than doubled—from $10 trillion to just under $22 trillion today. This adds up to about $70,000 per person, according to USA Today. The median household income in 2018 was just over $60,000, to put that in perspective.

This is clearly not just a proposal to reduce carbon emissions. If it were, it wouldn’t include the proposal to completely “transition off of nuclear” energy. If the world is going to end because of climate change, one would think nuclear energy would be one of the solutions to that problem.

On top of that, the Green New Deal aims at bludgeoning the fossil fuel industry, which, despite pie-in-the-sky promises that wind and solar energy will fix everything, still provides for the vast majority of our energy needs.

Of course, the Green New Dealers are completely unconcerned with these little details. Mere trivialities when utopia is around the corner.

The proposal actually contains this howler when addressing the costs: “At the end of the day, this is an investment in our economy that should grow our wealth as a nation, so the question isn’t how will we pay for it, but what will we do with our new shared prosperity.”

So the message is: Don’t worry your little heads, embrace the Green New Deal and all of your dreams will come true.

Though Ocasio-Cortez and other far-left proponents of the plan love to talk a good game about how the rich are going to pay for everything, the Green New Deal would fall disproportionately on poor, working-class, and middle-class Americans.

A 100 percent renewable electricity grid would require Americans to pay between 43 and 286 percent more on their electric bills. In 2017, the average monthly electric bill was $111, so a 43-286 percent increase would translate to an average of between $576 and $3,882 more spent on electricity per year per residence.

Needless to say, these are costs that many Americans can’t afford.

Craig Richardson, president of the Energy and Environmental Legal Institute, writes in the Washington Examiner that the “ugly truth” is that these policies “would serve as a regressive tax on the poor.” Richardson continues:

Ironically, it would be minorities and the poorest of the poor who would be disproportionately harmed. Low-income households already pay 7.2 percent of household income on home energy costs, more than three times the proportion paid by higher-income households on average, according to an American Council for an Energy-Efficient Economy report.

Not only are there not enough billionaires to soak to pay for the awesomely expensive plan, but the economic harm ultimately would fall most heavily on average Americans who would see their energy costs skyrocket and their jobs eliminated.

Oh, but don’t worry, if you lose your job, you will be put on welfare. That’s the American dream right there!

One provision in the Green New Deal stipulates that you will get economic security even if you are “unable or unwilling” to work. Out with the self-made man, in with the unrepentant mooch, I guess.

The Green New Deal is just the latest and most aggressive attempt by the left to move the American economy toward top-down government control.

It preys on the wild claims of the environmentalist movement—such as telling us that the world will end in 12 years—to foist socialist ideas on a country that has consistently rejected them.

Almost as bad is the fact that after immense cost and curtailment of liberty there would be little positive impact in changing the trajectory of climate change, even if the doomsday predictions are true.  According to the U.N.’s Intergovernmental Panel on Climate Change’s own numbers, if the United States cut carbon dioxide emissions by 100 percent, that would decrease temperatures by less than 0.2 degrees by the year 2100.

In the end, the Green New Deal is likely to be little more than a rehash of the corrupt, crony capitalist, green energy schemes of the past few decades, producing scores of new Solyndras and other boondoggles that enrich backers and impoverish everyone else.

Solyndra, a taxpayer-subsidized manufacturer of solar panels, was only the tip of the iceberg under President Barack Obama’s aggressive climate initiatives. According to a study by Mercatus Center, a free-market think tank associated with George Mason University, “federal subsidies for solar energy alone increased by about 500 percent, from $1.1 billion to $5.3 billion,” between 2010 and 2013.

But even with this surge in money, it didn’t mean those green energy companies succeeded in any way.

“[Subsidies] didn’t stop the largest U.S. solar panel manufacturer, SolarWorld, from filing for bankruptcy earlier this year despite $115 million in federal and state grants and tax subsidies since 2012, along with $91 million in federal loan guarantees,” Mercatus noted.

Ocasio-Cortez once attacked Amazon for cronyism and targeted subsidies, so why not the green industry?

In addition to the wasteful and obnoxious corporate cronyism, there is a greater threat at stake here.

As I wrote in January: “It’s no exaggeration to say that if implemented, the Green New Deal would upend our way of life and destroy the liberty and prosperity that Americans, of all backgrounds, currently enjoy.”

President Donald Trump said in his State of the Union address that “America will never be a socialist country.”

If we embrace the ideas of the Green New Deal, though, we will be.