I Agree With Ocasio-Cortez: Tax Subsidies for Select Corporations Are Wrong 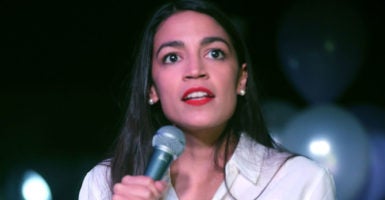 Amazon announced its decision on Tuesday that it will split its second headquarters—“HQ2”—between the Crystal City section of Arlington County, Virginia, and New York City.

For more than a year, cities across the country had been competing to earn Amazon’s business, offering special deals, such as hundreds of millions of dollars in tax breaks.

Rep.-elect Alexandria Ocasio-Cortez, D-N.Y., was right when she tweeted that the idea that Amazon would receive millions of dollars in targeted tax subsidies “is extremely concerning to residents here.”

Amazon is a billion-dollar company. The idea that it will receive hundreds of millions of dollars in tax breaks at a time when our subway is crumbling and our communities need MORE investment, not less, is extremely concerning to residents here.

I would add that it’s concerning to all Americans.

America is the land of freedom and opportunity for all, not favoritism for the few.

When governments carve out special deals for corporations, they grant big business an unfair advantage, and that hurts the little guy.

It makes sense that states want to attract highly profitable companies. They bring jobs and productivity that generate all sorts of benefits, such as lower unemployment, higher incomes, and a larger tax base.

But special-interest tax breaks are not the way to do it.

When governments try to target profitable businesses with special subsidies, it can mean higher taxes on small businesses and workers to cover the gap.

A better policy than targeted subsidies that reward already profitable companies is an economic environment that encourages all companies—big and small—to set up shop in their jurisdiction and to thrive there.

A level playing field with minimal government interference and low, broad-based taxes is not only the fair way to go, it’s the most constructive for long-run economic growth and sustainability.

Sure, corporations will gladly take millions of dollars in initial subsidies, but what they really want—and what they ultimately factor into their strategic decisions—is a favorable business climate, including minimal regulations, a capable workforce, and low-rate and stable taxes.

Creating that type of climate is what Ocasio-Cortez needs to consider when she said, “We need to dig deep,” when thinking about bringing jobs to the community.

That’s where Ocasio-Cortez gets it wrong, however.

She asks, “Has the company promised to hire in the existing community? What’s the quality of jobs + how many are promised? Are these jobs low wage or high wage? Are there benefits? Can people collectively bargain?”

When we talk about bringing jobs to the community, we need to dig deep:
– Has the company promised to hire in the existing community?
– What’s the quality of jobs + how many are promised? Are these jobs low-wage or high wage? Are there benefits? Can people collectively bargain?

But in doing so, Ocasio-Cortez implies that governments can and should pick and choose who they want to come to their community.

Far from the egalitarian proclamations of democratic socialism, that’s as elitist a policy as it comes.

What about small businesses that only employ five people or companies that struggle to meet payroll and can’t provide high wages and deluxe benefits? Is there no room for them in New York’s 14th Congressional District?

Amazon didn’t start out as a multi-hundred billion-dollar company employing more than a half-million workers. States that want to foster growth and innovation similar to Amazon’s shouldn’t put up barriers to entry, but instead create open doors to all sizes and types of businesses.

Imposing elitist criteria on businesses would be even more damaging.

When it comes to providing jobs and good incomes, it’s not that difficult. A level playing field with low, broad-based taxes and few barriers to entry will prove to be a winning strategy every time.