Maps Developed in Secret Suggest EPA May Be Expanding Regulation 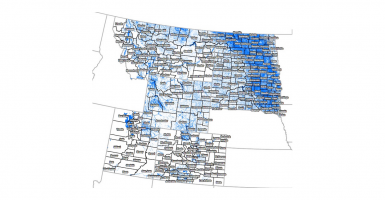 BISMARCK, N.D. — A map developed by the EPA and released to a U.S. House committee investigating controversial proposed water regulations should have citizens concerned, says U.S. Rep. Kevin Cramer. “It is certainly alarming the EPA would develop these maps in secret and only release them after being confronted by members of Congress,” Cramer, a Republican, said in a news release accompanying his office’s release of the maps. “The EPA has been hiding information which could upset the public and jeopardize its massive power grab of unprecedented authority over private and public water.” The maps were released by the EPA to the House Science, Space, and Technology Committee, on which Cramer serves. One map shows perennial bodies of water in blue and intermittent bodies of water in yellow. A second regional map including North Dakota, South Dakota, Montana, Wyoming, Colorado and Utah uses blue to show each state’s “wetlands inventory.” On that map, nearly the entire state of North Dakota is in blue. Critics of the proposed rule have suggested the EPA intends to use it to expand regulation far beyond permanent bodies of water to lands that hold water only some of the time. “It doesn’t take much of a leap to conclude these highly detailed maps developed with taxpayer funds are for the purpose of enforcing this rule,” Cramer said. But EPA officials say the maps have nothing to do with the Waters of the U.S. rule.

“Let us be very clear — these maps have nothing to do with EPA’s proposed rule or any other regulatory purpose,” EPA spokeswoman Liz Purchia told Fox News. The EPA has regulatory authority over “U.S. waters,” but it’s unclear how that authority extends to non-permanent bodies of water. In New Mexico, one landowner has already experienced the federal government attempting to regulate wetlands that aren’t always wet. In 2013 a landowner was prohibited by federal authorities who cited the Clean Water Act from cleaning out a dry creek bed.

Ultimately federal authorities backed down after the Pacific Legal Foundation filed a lawsuit on behalf of the property owners. But that may not happen in North Dakota. “It is a gall darn can of worms opening,” Pete Hannebutt, the director of public policy for the North Dakota Farm Bureau, says. “They’ve been trying to reinterpret the rules for years, and we’ve been jumping up and down saying it’s not right.” Hannebutt is concerned about the EPA’s maps. “It could impact everything that we do in generally accepted farming practices, including digging a fence post hole, including running fence, including growing hay. It could have a huge impact on us,” he said. He’s worried EPA’s regulations could be so broad as to hinder a farmer’s ability to access his land.

Rob Port is a reporter for Watchdog.org, a national network of investigative reporters covering waste, fraud and abuse in government. Watchdog.org is a project of the nonprofit Franklin Center for Government & Public Integrity.