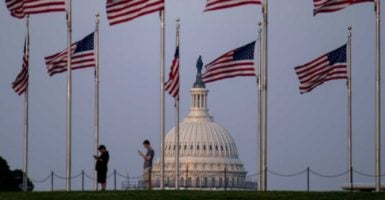 Autopilot spending is growing and will consume more than 75 percent of the entire federal budget by 2020. (Photo: Bill Clark/CQ Roll Call/Newscom)

The federal budget is out of control. Autopilot spending currently consumes 68 percent of all tax dollars and will devour an ever-larger share of the budget in the future.

If the lack of a congressional budget resolution this year is any indicator, Congress isn’t jumping at the chance to make meaningful reforms. However, time is of the essence. As the national debt climbs above $19 trillion, Congress must act quickly to restore fiscal responsibility. >>>For this and other charts about the federal budget, visit Federal Budget in Pictures

The expenditure budget is divided into three main parts—discretionary, mandatory, and net interest. Discretionary spending includes activities like defense and most education programs, and is decided by Congress annually through appropriations bills. Lawmakers must set funding levels for these programs every year by passing appropriations bills or a continuing resolution to provide resources for the programs to operate.

The remaining portions of the budget—mandatory spending and net interest—grow with less congressional action.

Mandatory spending programs include programs like food stamps and the big three entitlements—Medicare, Medicaid, and Social Security. Because of laws put in place years ago, agencies are authorized to spend whatever is necessary to keep the programs running (hence the term “autopilot”). So, when 10,000 baby boomers per day become eligible for Medicare and enroll, the budget automatically grows to accommodate them.

Net interest also grows automatically, determined by interest rates and the size of the debt. Taking control of interest payments may not seem like a priority today, but by 2024 interest on the national debt will cost more than national defense spending.

Autopilot spending is growing at an alarming rate and will consume more than 75 percent of the entire federal budget by 2020. As the autopilot portion of the budget grows, the budget becomes less responsive to current needs and crowds out spending on critical national priorities like defense.

Autopilot spending locks in status quo programs. Congress has the final say about mandatory expenditures and can change programs within the annual budget process. Lawmakers choose not to take action because there is little incentive to reduce spending on popular, but unaffordable, programs and there is no immediate penalty for ignoring the brewing budget crisis.

If Congress fails annually to fund the discretionary portion of the government, agencies cannot obligate resources to keep the programs running; if Congress ignores mandatory (autopilot) spending, nothing immediately happens. However, the longer Congress waits to address programs like Medicare, Medicaid, and Social Security, the larger the risk of a fiscal crisis during which investors may demand high interest rates to continue lending to the United States, and the deeper inevitable cuts will need to be.

Since mandatory programs receive funding no matter what, lawmakers have little incentive to subject them to regular review, make them more efficient, or undertake serious reforms to adjust the programs for current conditions. As a result, the bulk of today’s taxpayer dollars pay for programs that have not adapted to today’s world.

Consider Social Security—the last major changes to Social Security were adopted in 1983. In the 33 years since then, life expectancy in the U.S. has increased, more women joined the workforce, and the population as a whole grew older, on average. At the same time, the U.S. population is also richer and healthier. Yet Social Security benefits are automatically paid every year based on criteria established many decades ago.

Unless Congress makes changes to Social Security’s programs, its trust funds will be exhausted by 2035 and the Social Security Administration will only be able to pay those benefits it can cover with payroll taxes collected every year.

Not only are autopilot programs unresponsive to current needs, they limit future economic opportunity. Net interest and entitlements like Medicare, Medicaid, and Social Security are the primary drivers of spending and debt. If they continue growing at their current pace, Americans today and for generations to come will face higher taxes and the burden of excessive public debt.

The Heritage Foundation’s “Blueprint for Balance” maps out reform in critical programs like Medicare, Medicaid, and Social Security and proposes a conservative budget for Congress. Further, placing statutory spending caps on all noninterest spending would limit spending and program growth. Exceeding these caps would trigger automatic spending cuts. Lawmakers would be forced to prioritize spending instead of automatically funding programs regardless of resources available. This way the caps would bring mandatory programs back into the regular purview of Congress.