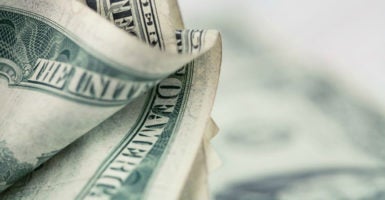 When members of Congress defend earmarks with “power of the purse” rhetoric, don’t fall for it. Congressional earmarks threaten the integrity of government spending.

This January, Senate Republicans led by Arizona Sen. Jeff Flake voted to continue the moratorium on earmarks for the 115th Congress. Flake backed his sentiment with a witty comment that “you can’t drain the swamps by feeding the alligators pork.”

While earmarks, synonymous with the pejorative term “pork-barrel spending,” have long been thought to be a vehicle of cronyism and political favors by conservatives, some GOP members in the House have considered an amendment to roll back the ban on earmarks citing, among other things, congressional duty and a more effective power of the purse.

This sentiment is worrying for many in Congress who remember how destructive earmarks were before and after they were “banned” in 2011. And even without earmarks, government waste and fraud is still rampant.

While prolonging the moratorium was a necessary step, members of Congress still find ways to circumvent the ban, and the processes that disburse funds in the absence of earmarks are imperfect as well.

Congressional earmarks are problematic for a variety of ethical, political, and economic reasons.

Most prominently, earmarks can be utilized by members of Congress to get pet projects such as museums, highways, and military bases funded in their district. In this way, earmarks are a tool for political jockeying as they can be offered as an incentive to sway an individual vote in Congress.

It is true enough that wasteful spending should always be avoided. But earmarks represent only a small portion of the discretionary budget—they reached their peak of $29 billion in 2006.

Their potential for toxicity stems from the fact that they are administered as political favors to members of Congress who vote to support certain pieces of legislation. In some cases, appropriated funds are used to line the pockets of corrupt politicians such as Rep. Duke Cunningham, R-Calif., in 2006, and more recently, Rep. Chaka Fattah, D-Penn.

Federal funds can also be administered through competitive grants that attempt to match funds with the most promising projects at the lowest cost through an application process.

While they often fail at achieving this goal, competitive grants can, at the very least, provide a process that is based on a premise of objectivity and merit compared to the blatant favoritism of earmarking.

For example, 92 percent of highway funding in the most recent surface transportation bill is distributed to the states through formula programs. These formula grants give more autonomy to state and local governments over funding decisions, while somewhat reducing the risk of corruption and cronyism.

While Congress has banned direct allocation of funds for individual projects, in practice, members have found ways to get around this.

Some members simply use more roundabout ways of obtaining funding for projects in their district, such as commemorative coin schemes. Another way is to attempt to influence federal agencies in how they spend their funds once money has been appropriated.

While legislators can no longer add specific projects onto bills due to the earmark ban, whether competitive grants are actually “competitive” is up for debate.

For instance, Transportation Investment Generating Economic Recovery grants that are administered through the Department of Transportation were supposedly in place as part of a temporary stimulus. However, it has turned into a more uncompetitive use of federal funds for pet projects like ferries and historic furnaces.

Even the funding formulas can be overly complex and incentivize costly behavior. The Community Development Block Grant, a grant administered by the Department of Housing and Urban Development, is a prime example of wasteful and inefficient spending through a formula method.

Citizens Against Government Waste reports that earmark funding increased from 2015 to 2016 by more than 20 percent, despite the formal ban. While the Senate ban will continue to limit wasteful and irresponsible spending, there is still far too much pork to go around in Washington.

More competition for federal funds will produce more value for taxpayer dollars. Congress should prevent its members from using federal agency accounts for their own pork-barrel projects through what might be considered executive earmarks.

Congress has the responsibility to use federal funds with prudence and efficacy. Holding its own members accountable is the place to start.

Note: This article was updated to correct the amount of federal spending on earmarks in 2006.