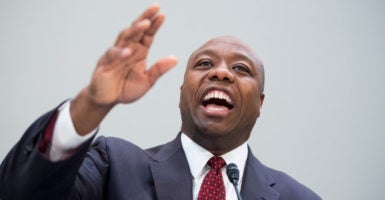 Sen. Tim Scott wishes the police officers who he believes egregiously stopped him various times were wearing body cameras, so that the public can see what he saw.

“I would have felt a bit more comfortable actually if there were body cameras present,” Scott, R-S.C., told The Daily Signal in an interview. “I think one of the reasons use of force complaints go down with body cameras is we are all on our best behavior when we know we will be filmed.”

Scott swept the Senate floor this week, giving a series of speeches in starkly personal terms about the deep divide he sees in America between the black community and law enforcement.

Inspired to action after two incidents last week where black men were fatally shot in encounters with police officers, Scott spoke first of his own experiences with police as an African-American.

On Wednesday, he described seven incidents with police he’s had since entering public service, including one where he was stopped by a Capitol Police officer last year who questioned Scott’s credentials even though he was wearing a pin that identifies him as a member of Congress.

“The vast majority of time, I was pulled over for nothing more than driving a new car in the wrong neighborhood, or some reason just as trivial,” Scott said during a speech on the Senate floor. “Imagine the frustration, the irritation, the sense of a loss of dignity that accompanies each of those stops.”

In his third and final speech this week on Thursday, Scott moved beyond his own story to call for action, listing a series of policy ideas to diffuse violent interactions between police and the public.

One of those remedies includes a bill he introduced last year to help state and local police departments buy body cameras.

Since the the fatal police shooting two years ago of a black teenager in Ferguson, Missouri, officer-worn body cameras have become a fixture of modern policing.

“My role is making a difference,” says @SenatorTimScott.

Supporters say the cameras can provide a non-biased account of officer-involved shootings and other violent situations, adding transparency and accountability to the process of investigating these incidents.

“While not a panacea, body cameras actually save lives and restore trust between the community and officers simply by having a recording of incidents between them,” Scott said.

Though research is in its infancy, some studies have shown that the use of body cameras can reduce use of force by officers and complaints by the public.

While some officers were initially reluctant to be scrutinized by body cameras, many have come to embrace them, believing the footage will confirm what police say they are doing.

“I do think body cameras actually protect the police as well, which is something officers have told me,” Scott said. “But for officers who are skeptical, I would tell them it’s better to have the restoration of community relations and removal of doubt to not having body cameras.”

As body cameras have become normal, their use has also raised policy questions whose answers may determine the effectiveness of the tool.

Many local police departments have devised their own policies governing how and when the cameras are used and whether the footage is released to the public.

Scott’s legislation is simple, and does not touch the policy questions.

The bill would authorize $100 million in annual Justice Department grants for police departments to purchase and deploy body cameras.

“I am of the opinion that we must allow local agencies to focus on the policies of storage issues, on length of video retention, and on decisions regarding the release of video,” Scott said in the interview. “With 7,000-plus law enforcement agencies [in the U.S.], the laboratories of democracy will produce better policy than the federal government can mandate. But we can be a funding mechanism on body cameras.”

Scott hopes this month’s deadly police shootings in Baton Rouge, Louisiana, and Falcon Heights, Minnesota, both of which were caught on bystander video, will push the Senate to act on body cameras.

He said Republicans and Democrats must settle differences in approach before they move forward.

“I am hopeful that as we head toward the end of year, that my legislation will be part of a package to be considered by the Senate,” Scott said. “It depends on how dysfunctional our friends on the other side of aisle are. Democrats want a more policy-oriented approach. I hate that. I don’t want strings attached to it. The federal government cannot or should not control local law enforcement.”

Scott promises to be far from removed in the process of coming up with solutions to address police shootings, using his unique position to promote change.

He said the Senate is considering its own version of a bipartisan group created by House Republican leaders and the Congressional Black Caucus this week that will focus on policing strategies.

“My role is making a difference,” Scott told The Daily Signal. “The powerful thing about our country is that while I do have a unique voice as an African-American conservative, the truth of matter is that when we see the problems as American problems we are better off. I hope to weigh in and give my two cents, but my two cents are not more valuable than anybody else’s two cents, although they may be very different.”