Governor to Obama in Food Stamp Fight: ‘Wake Up and Smell the Energy Drinks’ 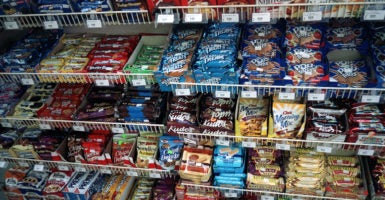 After the USDA rejected a request from Maine Gov. Paul LePage to prohibit the purchase of candy and soda with food stamps, he told the Obama administration to "wake up and smell the energy drinks." (Photo: Richard B. Levine/Newscom)

Maine Gov. Paul LePage may have considered a proposal to prohibit food stamp recipients from using their benefits to buy candy and sodas to be a sweet one, but the Obama administration disagrees.

The friction between the Republican governor and the U.S. Department of Agriculture has reignited a debate after the Obama administration denied LePage’s request to put restrictions on what can be purchased with food stamps.

In a letter to Agriculture Secretary Tom Vilsack, LePage said: “It’s time for the federal government to wake up and smell the energy drinks.”

In an interview with The Daily Signal, LePage’s health and human services chief explained what’s at stake.

“Certainly as a safety net program where the second word of the program’s name is nutrition, it is imperative that we are supporting what constitutes nutritional food and restricting those items that are not nutritional,” Mary Mayhew, commissioner of the Maine Department of Health and Human Services, said.

“There should be no debate that candy and soda are not nutritional, and we should not be funding with taxpayer dollars the purchase of candy and soda with the SNAP program,” she said.

The rejection letter prompted a fiery response from LePage, who criticized the Obama administration for being hypocritical regarding its commitment to healthy eating in schools.

In a response to Vilsack, the Republican governor wrote:

The Obama administration goes to great lengths to police the menus of K-12 cafeterias but looks the other way as billions of taxpayer dollars finance a steady diet of Mars bars and Mountain Dew.

LePage, who made welfare reform a centerpiece of his platform when he first ran for governor in 2010, went on to threaten to “cease Maine’s administration” of the food stamp program.

“It’s time for the federal government to wake up and smell the energy drinks,” LePage wrote. “Doubtful that it will, I will be pursuing options to implement reform unilaterally or cease Maine’s administration of the food stamp program altogether. You maintain such a broken program that I do not want my name attached to it.”

After LePage sent his letter to Vilsack, critics pounced.

Merrill stressed that state law requires the Maine Department of Health and Human Services to administer a statewide food supplement program in accordance with the Agriculture Department’s requirements.

“We work with people who rely on this food assistance to eat and feed their families,” she said. “I think just having put that threat [to leave the program] out there has created a lot of fear and anxiety around losing this critical help.”

Mayhew, who heads the agency, said any suggestion that Maine no longer is participating in the food stamp program is wrong:

What the governor has said is that he’s tired of defending this program that’s not really focused on nutrition and that is intended to meet the needs of young families, and if [the government] doesn’t like how Maine is seeking to administer the program, then it needs to come up with a way to administer it themselves.

The LePage administration viewed the proposal as a way to curb what the state agency said was an obesity-related health crisis driving up both Medicaid and private insurance costs.

Maine government officials also said the request was in line with LePage’s goal of ensuring welfare helps those who need it most.

According to her agency, Maine’s obesity rate doubled from 14 percent to 28 percent in the past two decades. The state’s incidence of diabetes also doubled from 3.9 percent to 9.5 percent.

About 15 percent of Maine’s population is on food stamps, and of those, 88 percent are also on Medicaid. Mayhew sees a connection between the food purchased with food stamps and the strain on the state Medicaid budget.

“It is frustrating to have two federal agencies failing to connect the dots between the decisions of one to allow the purchase of these terribly unhealthy items, and you have the other federal agency paying for the health care costs associated with obesity and diabetes,” Mayhew said.

So far, nine states—New York, Illinois, Minnesota, California, Nebraska, Pennsylvania, Michigan, Vermont, and Texas—have requested such waivers from the federal government or called on policymakers in Washington to give states permission to prohibit junk food purchases with food stamps.

Merrill, the head of Maine Equal Justice Partners, said her organization agrees with LePage and Mayhew regarding the need to address public health.

However, how to do so and whether placing constraints on the food stamp program will accomplish that goal remains a point of disagreement.

“From our point of view, eliminating access to this program won’t do anything to promote public health,” Merrill said, adding:

We have vulnerable individuals and families who depend on this program. We need to tighten it up to make sure it’s used as intended. These items never should have been involved. There’s an opportunity to reform it, and it’s apparent the USDA won’t do it on its own.