What Comes After ‘Skinny Repeal’ of Obamacare? 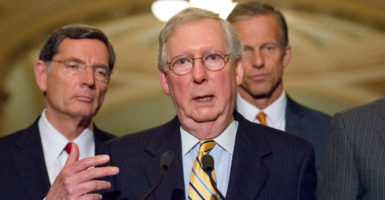 A "skinny repeal," while not yet clearly defined, would repeal only a few of Obamacare's most unpopular provisions. (Photo: Ron Sachs/dpa/picture-alliance/Newscom)

Republican senators are reportedly working on a so-called “skinny repeal” of Obamacare.

While details remain sparse, no one should mistake this last-minute effort for being the culmination of Republicans’ seven-year promise to repeal and ultimately replace Obamacare.

The inconclusive nature of the process stems from a fundamental divide within the Republican Party over how much of Obamacare to repeal and what, if anything, should take its place.

This process was always going to be difficult—no consensus was built over the past seven years—but this week’s gamesmanship on the Senate floor highlights why conservatives are justifiably frustrated with the obstinacy of their more moderate colleagues.

To quote Sen. Ben Sasse, R-Neb., “There was a lot of show voting going on here 15 months ago.”

No one should excuse moderate Republicans’ reluctance to keep their promise to repeal Obamacare. But the restraints imposed by Republicans’ current governing coalition will take years, not weeks, to overcome. The long-term work of righting that ship need not and cannot prevent Republicans from governing in the here and now under those constraints.

As the Senate’s Obamacare efforts—however one chooses to define them—come to a culmination late Thursday night or early Friday morning, it is critically important that conservatives understand what is at stake with the various potential outcomes and, equally important, what comes next.

Over the past several days, Senate Republican leadership appeared to abandon any hope of a wide-ranging repeal-and-replace bill like the Better Care Reconciliation Act. Instead, their focus shifted to a very narrow bill that would repeal a few of Obamacare’s most unpopular pieces.

Heritage Action will evaluate the policies contained in any “skinny repeal” bill on their merits.

It is quite likely that some good policies will be included in such a bill. One report even suggested it could allow wide latitude for state experimentation through the reformed 1332 waiver process included in the Better Care Reconciliation Act.

That would be a positive signal that Republicans are truly committed to returning some regulatory authority back to the states.

Of course, Americans deserve an honest assessment about what is lacking in the “skinny repeal” and honest answers as to how Republicans intend to address those outstanding issues.

The most likely response to valid conservative concerns that the “skinny repeal” leaves the core pillars of Obamacare in place will be to utter the phrase “conference committee.”

At first glance, there is very little reason to believe a more conservative version of the Senate’s Better Care Reconciliation Act would emerge from a conference committee process.

First, a conference committee would not change the fundamentals of the Senate. And second, historically, conference products tend to be watered down to the lowest common denominator.

There is an incredibly heavy burden on Republican leadership to demonstrate those fears are misplaced.

At this point, it is not clear anything Obamacare-related can pass the Republican-controlled Senate.

Regardless of what happens later today, we know that Democrats will not stop in their quest for a nationalized, single-payer scheme. And despite justified disappointment with the current process, conservatives cannot cede the playing field.

Americans need relief from Zombiecare, and conservatives must continue to fight for more freedom, lower premiums, and less government.