Obama Is Planning to Circumvent Congress Yet Again on Climate Regulations 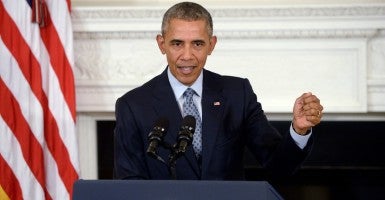 Because the EPA has finalized climate regulations, Obama will be able to bring more to the table than any other climate conference. (Photo: Sipa USA/Newscom)

President Obama is determined to make a legacy for himself—so much so that he’s willing to go around America’s elected officials on climate change. Not once, but twice.

First, Obama bypassed Congress with unelected bureaucrats at the Environmental Protection Agency to put domestic carbon dioxide cuts in place that will drive up energy costs with no climate benefit. And now, in a few months at the Paris Protocol climate summit, Obama will attempt to forge an international agreement on climate without the consent of Congress.

The Paris Protocol climate change agreement will be negotiated at the beginning of December. Rather than submitting a treaty to be ratified by the Senate, the White House has signaled its intention to prevent Congress from having any input on the agreement.

The Constitution, however, requires that any legally binding treaty be ratified by two-thirds of Senate and signed by the president. As my colleague Steven Groves writes, the administration may do everything in its power to avoid sending any commitments made in Paris to the Senate.

Although climate agreements have been relatively meaningless the past few years, Paris will be different.

Because the Environmental Protection Agency has finalized climate regulations, Obama will be able to bring more to the table than any other climate conference to persuade other countries to commit to carbon cuts. More importantly for many of the other countries around the table, there’s money to be had. A lot of money.

Previous international climate discussions have called for tens of billions of dollars per year, rising to $100 billion per year, to assist developing countries in combating climate change. This could be enough to forge a broad coalition of international support without any input from our elected officials.

Cutting CO2 emissions to mitigate climate change and transferring large sums of money will cost Americans gravely—both as energy consumers and as taxpayers. And all to address a non-problem.

While carbon dioxide and other greenhouse gas emissions may have contributed in some capacity to climate variations, the available climate data simply do not indicate that the Earth is heading toward catastrophic warming with dire consequences for human health and public welfare.

Such a view does nothing to account for the shortcomings of climate models, models that are the underlying foundation for carbon policies and regulations and these international agreements. While some climate models have forecast such a catastrophe, data of observed climate reality have proven this to be untrue.

Any agreement the administration reaches in Paris will result in wasted taxpayer money, the micromanagement of energy markets with government-backed financial programs, and heavy-handed regulation that restricts the use of affordable energy for Americans.

Soon after the election in 2008, Obama urged Congress to send cap-and-trade legislation to his desk. The plan would’ve set limits on carbon dioxide emissions in a given year and allotted a set number of tradable permits to meet those targets. In his plan, this would raise the cost of energy high enough so that individuals and businesses are forced to use less of it and therefore reduce emissions.

Despite a lot of wheeling and dealing and handouts to special interests, the more than 1,400-page bill ultimately died in the Senate. Soon after, Obama said, “Cap and trade was just one way of skinning the cat; it was not the only way. It was a means, not an end. And I’m going to be looking for other means to address this problem.”

The “means” Obama is using are unelected bureaucrats at the EPA.

Recently the administration finalized climate regulations for new and existing power plants under the Clean Air Act. In imposing the regulations, the EPA is avoiding accountability and charging states to develop carbon reduction plans that can include carbon taxes, mandating more renewable power, regional cap-and-trade plans, and more. If states choose not to comply, the federal government could force them to enact a cap-and-trade plan developed by the EPA.

No matter how states develop their plan, the costs of more expensive energy will be borne by all Americans. Because 80 percent of America’s energy needs are met through carbon-emitting natural resources, burdensome climate regulations would consequently increase household and business energy bills. The direct hit of higher energy prices is a part of the economic pain felt.

Energy is a necessary component for just about all of the goods and services consumed, so Americans will pay more for food, health care, education, clothes, cleaning supplies—just about every aspect of life.

Congress needs to stand up to the administration’s unilateral, draconian regulations by prohibiting any federal agency to regulate greenhouse gas emissions. Further, Congress should withhold any funds to implement any part of agreement reached in Paris. Or else we can waive au revoir to affordable energy and billions of taxpayer dollars.