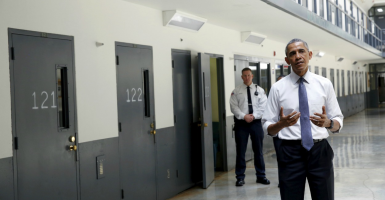 Sherman Chester is built like an NFL cornerback. His size belies a calm, respectful demeanor and a soft-spoken wit. On politics, he says he registered to vote as a Republican in 1984 because “Ronald Reagan was in office” and “America was doing it!” And when asked how he felt when he received a mandatory life sentence without parole for selling cocaine and heroin, he says he was “a little miffed.”

But he isn’t flippant about crime. His family faced dire straits, a family friend ran a drug trade, and he made what he calls “a bad decision.” His sentencing judge agreed, but went on record objecting to the mandatory minimum sentence in Chester’s case, saying, “This man doesn’t deserve a life sentence, [but] there is no way that I can legally keep from giving it to him.”

That was in 1994. Thinking back on it, Chester says, “I can’t blame anyone but myself and be accountable for what I did.” But as he saw the same people rotate in and out of prison while he was to “rot away for decades,” Chester says, he took it “as an insult.” “They say it’s hard out there,” but Chester is adamant: given his freedom, he would put it to good use.

Obama commuted his sentence on Dec. 18, 2015, and he now lives in a Tampa, Florida, halfway house.

He is already putting the professional certification he earned in prison to good use: He is an electrician and is proud of his trade. On weekends, he spends time with family.

On mandatory minimum sentencing laws, he says, “there’s something wrong with [the] picture” when someone who murders a police officer is locked up for 30 years, but someone who deals a small amount of drugs is put away for life.

One can certainly sympathize with Chester and other non-violent offenders like him (although most drug transactions inherently involve some potential for violence, lethal overdose, or support for gang activity), who made mistakes, who have truly turned a new leaf, but who are stuck in prison for extremely long periods of time because of mandatory minimum sentences.

As Heritage Foundation scholars have argued before, mandatory minimums serve valuable purposes: They “guarantee that sentences are uniform throughout the federal system”; “ensure that individuals are punished commensurate with their moral culpability by hitching the sentence to the crime, not the person”; and through “reliance on fixed, lengthy prison sentences,” they “enable communities to conserve scarce enforcement resources without losing any deterrent benefit,” while also giving police and prosecutors “the leverage necessary to secure the cooperation and testimony of low-level offenders against their more senior confederates.”

Yet, there are cases like Chester’s where the rigidity of mandatory minimums may be unjust as applied.

One “financially desperate single mother of four with no criminal history” once took $100 from a stranger to “mail a package that, unbeknownst to her, contained 232 grams of crack cocaine.” She was arrested, prosecuted, and although her sentencing judge “felt that this punishment was completely unjust and irrational,” she received a 10-year prison sentence.

Another man received a 15-year jail sentence for possession of 31 Vicodin pills that he had to attempt suicide by overdose. The sentencing judge said, “I do believe this is an inappropriate sentence for you … but there are restraints placed on my ability to stray from the statutory framework that would result in [your] early release.”

Heritage scholars have argued that while “Congress was right to be concerned about reducing sentencing disparity and ensuring that sentences are neither unduly lenient nor unduly harsh,” sentencing laws should also “leave room for adjustment in certain cases where a legislatively fixed sentence would be manifestly unjust.” And because “no statute can account for every variable in every case,” Congress could grant district courts “some additional limited sentencing discretion” to reduce “some unjust sentences without obviously undercutting the incapacitative, deterrent, and educative benefits of the criminal law.”

Some have criticized Obama’s liberal use of his constitutional authority to grant pardons and commutations, perhaps with some justification at least with respect to offenders who committed violent offenses in the past.

Nonetheless, such powers remain available to the president at the federal level and to governors at the state level to provide leniency in appropriate cases when the courts cannot.

Many criminal justice reform proposals, including mens rea reform, are currently being debated at the state and federal level. When it comes to reforming mandatory minimum laws, it is important to consider the nature of the serious offenses giving rise to such penalties and the harms they cause to society.

At the same time, it is important to consider what should be done for people like Sherman Chester so that, in appropriate cases, the quality of mercy is not strained. This is a discussion worth having.