Why the Left Is Wrong to Demonize Affordable Energy 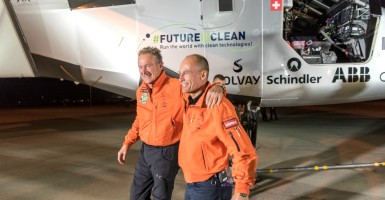 Innovation is a wonderful thing but can also serve as a reminder of just how good we have it. Take the journey of the solar-powered plane, for example.

The Solar Impulse 2 is an airplane powered by solar panels and uses batteries at night. In promotion of weaning the world off natural resources like oil (a dubious goal), the designers and pilots want to fly around the world using no conventional fuel.

While the journey itself is an impressive accomplishment, one can’t help but appreciate the abundance, affordability and reliability of oil. Brad Plumer of Vox compares the solar-powered technology with a traditional plane:

The Solar Impulse 2 features 17,000 solar cells crammed onto its jumbo jet–size wings, along with four lithium-polymer batteries to store electricity for nighttime. Yet that’s still only enough power to carry 2 tons of weight, including a single passenger, at a top speed of just 43 miles per hour.

By contrast, a Boeing 747-400 running on jet fuel can transport some 400 people at a time, at top speeds of 570 miles per hour. Unless we see some truly shocking advances in module efficiency, it’ll be impossible to cram enough solar panels onto a 747’s wings to lift that much weight—some 370 tons in all.

Nor is it enough to load up on batteries charged by solar on the ground, since that would add even more weight to the plane, vastly increasing the energy needed for takeoff. A gallon of jet fuel packs about 15 to 30 times as much energy as a lithium-ion battery of similar weight.

Air travel, once a luxury privilege for the wealthiest of people, is now broadly available for the masses. Sure, consumers still have their complaints about airline industries, but the ease and convenience of traveling from Charlotte to Seattle is something most Americans take for granted. Previous generations had no such opportunities.

The cost of energy has incentivized airline companies to innovate, not through alternative fuels but through improved energy efficiency. Air travel today is 70 percent more fuel-efficient than it was in the 1960s. From 2004 to 2012, airlines increased energy efficiency by over 24 percent.

They’ve accomplished this largely by using lighter materials, engine control systems, and winglets to improve aerodynamics. But they’ve even gone to such granular detail as to reduce the amount of ice carried on board for complimentary drinks.

The affordability and reliability of conventional jet fuel doesn’t mean innovators should stop trying to develop alternative fuel sources. Competition provides more choice at competitive prices. If solar power (or biofuels, batteries, or some other energy source that has yet to be discovered) becomes a cheaper and more dependable substitute to oil-based fuels, it’s the consumers that ultimately win.

Encouraging innovation, however, shouldn’t come at the expense of disparaging the use of oil, coal, and natural gas. Ridding the world of abundant, cost-effective, and reliable energy sources should not be a policy goal.

Energy is a critical catalyst for economic growth. In a nutshell, the difference between the solar-powered plane and one running on oil explains why more than 80 percent of the world’s energy needs come from oil, coal, and natural gas.

These natural resources have made peoples’ lives dramatically better, not worse. They’ve provided families not only with a reliable source of energy but also serve as an input for fertilizers, plastics, cosmetics, medicine, and much more. They have increased levels of prosperity all over the world.

That’s cause for celebration, not demonization.