Are Airline Prices Going to Rise Because of the EPA? 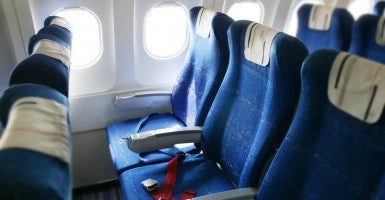 If we see airline prices go up in 2016, you might be able to thank the lawyers at radical environmental groups Center for Biological Diversity and Friends of the Earth.

In response to a lawsuit by these organizations, the EPA has unsurprisingly announced a proposal that airplane emissions do “endanger the public health and welfare of current and future generations.”

While the EPA is selling this regulation as being about the health of the American people, it’s not. The EPA’s conclusion is the latest assault on the consumer in the name of impacting global warming.

The groups, along with other extremist organizations like the Natural Resources Defense Council, petitioned the EPA in 2007 to determine the effects of airplane emissions on air quality, and subsequently sued the EPA for not doing so. The D.C. District Court mandated that the EPA make a determination and the environmental groups again threatened to sue if EPA did not make a determination by February 2015.

Why was EPA’s conclusion unsurprising? Well, the EPA issued an “endangerment finding” in 2009, stating that carbon dioxide emitted from vehicles was a pollutant dangerous to public health. Consequently, EPA issued a series of greenhouse gas regulations on cars and light-duty trucks. This led to regulations on existing and future power plants, known as the Clean Power Plan, to be finalized jointly this summer. The next moving thing to regulate was clearly planes.

EPA has already initiated a rulemaking process considering how it might regulate airplanes to be in conformity with the U.N.’s International Civil Aviation Organization’s standards on airline greenhouse gas emissions. EPA has been a part of discussions to set ICAO standards, which are expected in February 2016.

These actions are entirely unnecessary, however.

According to the Federal Aviation Administration, airplanes have outpaced cars and transit buses to be one of the most energy efficient modes of transportation. Airlines are inherently interested in finding ways to use energy more efficiently (and consequently reduce carbon dioxide emissions) as fuel expenses are the largest source of operating expenses.

Fleets are only going to become more efficient as new planes naturally replace older, retiring planes—according to the Federal Aviation Administration, over half of today’s fleet of airplanes will be retired and replaced with new planes in 10 years.

According to the Federal Aviation Administration, airplanes have outpaced cars and transit buses to be one of the most energy efficient modes of transportation.

When it comes to real pollutants like particulate matter, nitrous oxides, volatile organic compounds and sulfur dioxide—pollutants which EPA regulates because at some level these do have negative effects on human health—airplanes create a miniscule fraction of emissions compared to ships, rail and road transportation.

But the EPA’s endangerment finding today has very little, if anything, to do with these pollutants. It has everything to do with the EPA’s dubious conclusion that manmade greenhouse gas emissions—particularly from carbon dioxide—are causing and accelerating catastrophic global warming.

In coming to its endangerment finding for airplanes, the EPA relied on its initial endangerment finding in 2009 that carbon dioxide emissions were harmful to human health because of the alleged connection with global warming, and therefore able to be regulated by the EPA under the Clean Air Act. However, the climate science was dubious then and over the six years since even more scientific data has shown the endangerment finding to be on shaky ground.

EPA has yet to propose regulations on airplane carbon dioxide emissions. However as with its expensive vehicle and power plant regulations, the costs will ultimately be borne by American consumers, families and businesses unless Congress intervenes first.

When costs of compliance increase, it also means less opportunity (fewer jobs to go around) and forcing people to make tough decisions about their family budgets (in order to pay the higher utilities bill).

EPA’s global warming agenda will affect quality of life. So what are we getting for the costs? Unfortunately, not much.