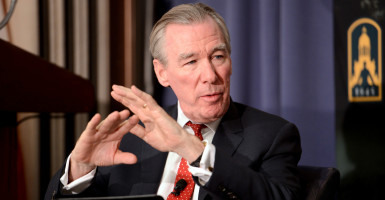 “It would be a very sad day if America, in such a brief time, were to abandon its commitment to religious freedoms," John Garvey, president of the Catholic University of America, said. (Photo: Chuck Myers /AbacaUSA.com/Newscom)

The head of one of the nation’s most prominent Catholic universities said in an interview with The Daily Signal that Obamacare is at odds with the institution’s mission by mandating coverage of contraceptives and abortion-inducing drugs in health plans.

Requiring such insurance coverage in violation of deeply held religious beliefs “makes hypocrites of us,” John Garvey, president of the Catholic University of America, said in the interview.

“It would be a very sad day if America, in such a brief time, were to abandon its commitment to religious freedoms,” Garvey said.

The Supreme Court will hear oral arguments Wednesday in Zubik vs. Burwell, the name for several related cases challenging the regulation imposed by the Department of Health and Human Services.

>>>Little Sisters of the Poor Case Heads to Supreme Court

Catholic University, located in Washington, D.C., is one of many religious organizations petitioning for relief from the so-called contraceptive mandate’s requirements in the consolidated case being heard during Holy Week. Garvey said he will attend the proceedings.

Under Obamacare, formally known as the Affordable Care Act, most health insurance plans must cover contraceptives and abortion-inducing drugs without cost sharing.

Organizations that object to the mandate for religious reasons are required to notify HHS and provide contact information for their health plan insurer or third-party administrator.

The insurers or third-party administrators then provide the coverage required at no cost to insured employees.

The HHS regulation under Obamacare requires dissenters to cooperate in “an act that we view as sinful,” Garvey told The Daily Signal. “We’re helping somebody to do what we view as wrong.”

He noted that Pope Francis held Mass at the university on Sept. 23, 2015—exactly six months to the day before the scheduled arguments.

“The message that he preached at his Mass on that day was that religion is important,” Garvey said, adding:

In the course of his visit, he made the point that religious freedom is important—not just to protect our teaching, but also that we should go out into the world and proclaim the gospel.

The university president said the institution he leads isn’t interested in preventing students or employees from acquiring contraceptives or other devices, drugs, or services that the Obamacare mandate would force it to provide.

“We’re just saying that it shouldn’t be our obligation to pay for them, because we view them as wrong, but people are free to do as they want,” Garvey said.

The Supreme Court is expected to release a decision in June.

Garvey, who is also an attorney admitted to the Supreme Court bar, said the Feb. 13 death of Justice Antonin Scalia may have a significant impact on the outcome. Scalia, a Catholic himself, was perhaps the court’s most conservative justice.

The university is exploring what actions it may take if the ruling is not in its favor, Garvey said.

If the court reaches a split 4-4 decision, he said, it is possible the justices may affirm one of the lower case decisions saying religious organizations must comply without releasing their own opinion. Or they may wait until a ninth justice is appointed, confirmed, and seated to break the tie.

“I’ve been wrong so often that I’ve given up predicting what the court is going to do. But we certainly hope that they see it our way,” Garvey said.

Garvey said the Constitution and the federal Religious Freedom Restoration Act, a bipartisan measure designed to guarantee protections for deeply held religious beliefs, are on the university’s side:

It would be a very sad day if America, in such a brief time, were to abandon its commitment to religious freedoms. The Constitution protects it, which was one of the reasons so many of our parents, grandparents, forebears came to this country.

Garvey described controversy over legal protections for religious believers, including Indiana’s decision to pass a watered down Religious Freedom Restoration Act at the state level, as a “sad development.”

“I personally think that what we’re seeing in most of the fights we have about religious liberties these days is conflict over a sexual agenda that was formulated in my own childhood and has taken on almost a kind of religious fervor,” Garvey, 67, said.

John Vivian, president of the university’s student organization, the Saint John Paul II Guild of Catholic Lawyers, told The Daily Signal that some of the group’s members are “going to be camping out and attending the oral arguments” at the Supreme Court.

Vivian, a law student, said not upholding religious freedom can be a “slippery slope, to not just infringe on people’s individual freedoms and their other constitutional rights, but also it can grow into large-scale persecution.”

It’s certainly much larger than just Catholics being opposed to contraceptives. It really has to do with, you know, protection of constitutional liberties.