Little Sisters of the Poor Case Heads to Supreme Court 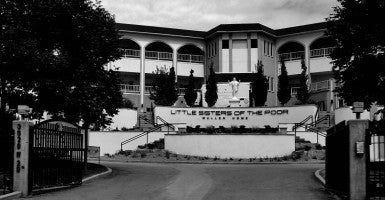 The Supreme Court will hear oral arguments this week in a group of cases challenging the Obamacare requirement that nonprofit employers offer their employees health care coverage that includes Plan B, ella, and other potentially life-ending drugs and devices, contraception, and sterilization.

The challengers in the consolidated cases, captioned Zubik v. Burwell, include the Little Sisters of the Poor; Priests for Life; East Texas Baptist University; Southern Nazarene University; Geneva College; the Archdiocese of Washington, D.C.; and other religious charities.

Notably, the government is imposing its mandate on groups like the Little Sisters of the Poor, who care for the elderly poor, but is exempting large corporations like Exxon and Pepsi Co.

Notably, the government is imposing its mandate on groups like the Little Sisters of the Poor, who care for the elderly poor, but is exempting large corporations like Exxon and Pepsi Co.

The latter aren’t required to include these drugs and devices in their health plans because they’re grandfathered under Obamacare. Small businesses are also exempt from this mandate. The government has even acknowledged that the mandate could conflict with religious beliefs and has formally exempted houses of worship.

The Becket Fund for Religious Liberty estimates that the government has effectively exempted the health plans of 1 in 3 Americans from the coercive rule.

Yet the Obama administration insists that organizations like the Little Sisters of the Poor, a group of nuns who beg for funds for the elderly they serve and their own food, comply with the mandate or face $70 million per year in government penalties.

After religious organizations objected to the mandate, the Obama administration created an alternative enforcement mechanism that it claims is an “accommodation.”

The regulations require employers to notify the Department of Health and Human Services of their religious objection to providing such coverage in writing and provide contact information for their health plan insurer or third-party administrator.

The government then uses that notification as authorization to force coverage of drugs and devices that violate the employers’ beliefs using their existing health plan infrastructure. The government says that without the employers’ active participation in this scheme through the notice provisions, it cannot legally take over their plans as just described.

The government thinks this scheme satisfies the employers’ religious beliefs because the notification initiates the process of insurers and third-party administrators providing the mandated coverage at no cost to the insured. But the Little Sisters of the Poor and many other religious employers disagree.

They refuse as a matter of conscience to accept this mechanism because coerced subsidies were only part of the original mandate’s problem. If the federal government required employers to dispense these drugs and devices from a vending machine in their employee lounge, it would be no answer for the government to say, “Don’t worry; we’ll pay for the added cost.”

Similarly here, the Little Sisters and other religious employers would still play an indispensable part in the machinery that provides potentially life-ending drugs and devices through health plans and infrastructure that they are paying for and providing to their employees.

Several federal appeals courts have reviewed cases challenging these regulations brought by Christian colleges and ministries such as Catholic Charities, Priests for Life, and the Little Sisters of the Poor. These religious employers maintain that the Obama administration’s regulations violate the Religious Freedom Restoration Act, a federal law that bars the government from substantially burdening the free exercise of religion.

The government may overcome this prohibition only if it can show that the burden is the least restrictive means of furthering a compelling interest.

If this sounds familiar, that’s because the Supreme Court decided a similar case in the summer of 2014. In Burwell v. Hobby Lobby, the Court held that certain for-profit employers—such as the closely held family-run craft store chain—could not be forced to violate their religious beliefs by paying for potentially life-ending drugs and devices as part of their employee health insurance plan.

The majority opinion, written by Justice Samuel Alito, pointed to the “accommodation” offered to non-profit religious employers as proof that the government could advance its asserted interest in providing women with free contraception while not trampling the religious beliefs of employers. The Court did not, however, address whether the alternative could still pose a substantial burden.

Now the Court is presented with that very issue in Zubik v. Burwell. From the challengers’ perspective, the regulations impose a substantial burden by forcing them to engage in conduct that will trigger morally objectionable health care coverage, thereby making them complicit. If they refuse to comply, they face ruinous fines.

They see the “accommodation” regulations as “merely … another way to violate their religion.” But the government says the Little Sisters and other religious employers are mistaken about their role in the process.

The Obama administration maintains that it is federal law—not the employers’ act of signing a form—that leads to the provision of drugs and devices.

If that were the case, why, then, does the government continue to insist that these employers provide written notice on pain of millions of dollars in fines when the government already knows beyond any doubt that they object? Because the government says that it requires the Little Sisters and others to act in cooperation with the government’s scheme, and that’s precisely the problem.

While nearly all the appeals courts that have looked at the issue have ruled in favor of the administration, the U.S. Court of Appeals for the Eighth Circuit noted that the government must “come forward with evidence that the contraceptive mandate and the accommodation process are the only feasible means to distribute cost-free contraceptives to women employed by religious organizations and that no alternative means would suffice to achieve its compelling interest.”

Indeed, there are plenty of other ways for the government to provide no-cost contraception directly to women who want it—without hijacking employers’ health plans and trampling on religious freedom.

In the Hobby Lobby decision, the Court discussed the possibility of the government directly providing or paying for these drugs and devices while allowing employers to obey their consciences.

The government already does this under Title X for many low-income women. Thus, if the Court holds the administration to the high standard laid out by the Eighth Circuit, it may be a herculean task for the administration to prove that the “accommodation” regulations are the only way to ensure that women have access to free contraception.

It’s worth pointing out that the Little Sisters and other challengers lost a likely ally with the sudden death of Justice Antonin Scalia. He voted in the majority in Hobby Lobby. With only eight justices currently on the Court, the decision could end up as a tie vote of 4-4. Generally speaking, when there is a tie at the Supreme Court, the lower court ruling stands. In most cases, that’s not ideal for parties appealing a lower court ruling. But in this situation, a tie vote would mean that the circuit split remains, since the Eighth Circuit broke ranks with the other circuit courts, which issued erroneous pro-administration decisions.

President Barack Obama’s nominee to the Supreme Court, D.C. Circuit Chief Judge Merrick Garland, voted against rehearing one of these cases when it was pending before his court.

In Priests for Life v. U.S. Department of Health and Human Services, a three-judge panel ruled for the government, calling the accommodation process “a bit of paperwork.” When Priests for Life asked the full D.C. Circuit to rehear the case, Garland voted against rehearing it. This was over the protest of Judge Janice Rogers Brown, who explained why the three-judge panel got it wrong:

What amounts to “facilitating immoral conduct” … or “impermissible cooperation with evil” … are inherently theological questions which objective legal analysis cannot resolve and which “federal courts have no business addressing.”

You don’t have to agree with any of the organizations before the Court or share their beliefs to recognize that the government should not be able to force Americans to set aside their deeply held beliefs simply because they step outside the four walls of a church to serve the poor, heal the sick, or educate the next generation.