Obamacare Abortion Drug Accommodation: A Bit of Paperwork or Complicity in Sin? 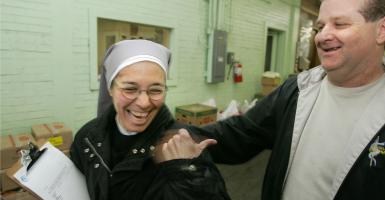 In 2007, this was Market Day for Sister Michael, the official "Begging Nun" at Little Sisters of the Poor, whose job was rounding up enough food to feed the many in her care: 14 nuns and 105 residents.(Photo: Jill Toyoshiba/MCT/Newscom)

The Obamacare mandate requiring non-profit religious employers to facilitate health care coverage of abortion-inducing drugs and devices for employees may be heading to the Supreme Court soon.

This mandate—which exempts formal houses of worship and their integrated auxiliaries like church-run soup kitchens—requires non-profit religious employers to provide this coverage or notify the Department of Health and Human Services that they have a religious objection.

This notification initiates the process of the government forcing insurers and third-party administrators to provide the mandated coverage to employees. Federal law, however, prohibits the government from substantially burdening the free exercise of religion unless it can show that the burden is the least restrictive means of furthering a compelling government interest.

Since the Obama administration issued the abortion drug mandate in 2011, employers such as the Little Sisters of the Poor, Geneva College and Ave Maria University have attacked it in court. They argue that the causal link between notifying the government and the resulting provision of objectionable drugs and devices substantially burdens their religious exercise.

You don’t have to agree with the Little Sisters (and many others) or share their views on abortion to recognize that the government should not be able to force Americans to choose between their religious beliefs and the law.

Likewise, what may seem trivial to one person may give rise to a serious religious dilemma for another. Though one judge called the accommodation process “a bit of paperwork,” the Little Sisters and others challenging the accommodation view it as complicity in a grave moral wrong.

And the Supreme Court has held that even an indirect burden may substantially infringe on free exercise rights. In Thomas v. Review Board (1981), the Supreme Court stated, “[I]t is not within the judicial function and judicial competence to inquire whether [someone] correctly perceived the commands of [his] faith. Courts are not arbiters of scriptural interpretation.” Thus, courts should not be in the business of line-drawing when it comes to theological questions.

But this type of line-drawing is just what two federal appellate courts have been up to this week. In Priests for Life v. U.S. Department of Health and Human Services, a three-judge panel of the U.S. Court of Appeals for the D.C. Circuit ruled against Priests for Life, which sought a preliminary injunction from the Obamacare mandate and accommodation. They asked the full D.C. Circuit to rehear the case, but on Wednesday, the court rejected that request over the protest of two judges. Judge Janice Rogers Brown (who would have granted the request to rehear the case) explained why the 3-judge panel got it wrong:

“What amounts to ‘facilitating immoral conduct’ … or ‘impermissible cooperation with evil’ … are inherently theological questions which objective legal analysis cannot resolve and which ‘federal courts have no business addressing.’”

Though the government (and a majority of judges on the D.C. Circuit) may believe this accommodation is sufficient to distance these religious employers from acts they find morally objectionable, Priests for Life and many others clearly do not agree. As Judge Brown pointed out, “Pontius Pilate, too, washed his hands, but perhaps he perceived the stain of complicity remained.”

In another case, University of Notre Dame v. Burwell, a three-judge panel of the U.S. Court of Appeals for the 7th Circuit found that, like Priests for Life, the university was not entitled to a preliminary injunction from the Obamacare mandate and accommodation.

Earlier this year, the Supreme Court instructed the appeals court to reconsider its ruling, which was issued before the decision in Burwell v. Hobby Lobby (2014). Earlier this week, the panel again ruled against the university in a 2-1 decision. The majority claimed that it is federal law—not the university’s signing of a form—that triggers provision of the objectionable drugs and devices. But as Judge Joel Flaum noted in his dissent, the majority “in effect tell[s] the plaintiff[ ] that [its] beliefs are flawed.”

Priests for Life and Notre Dame may now take their cases to the Supreme Court.