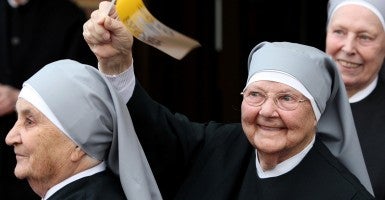 A sister at Little Sisters of the Poor. (Photo: Chris Radburn/Newscom)

Jason Miller is an intern in the Young Leaders Program and a second year law student at The Catholic University of America.

Today the 10th Circuit Court of Appeals in Denver will hear oral argument in the Little Sisters of the Poor’s challenge to the Obamacare abortion-inducing drug mandate “accommodation.”

The case, made famous by Justice Sonia Sotomayor’s midnight injunction almost one year ago, challenges an “accommodation” the Obama administration has offered to religious non-profit organizations allowing them to avoid directly providing or paying for healthcare coverage of potentially life-ending drugs and devices. Under the so-called accommodation, these employers must notify the Department of Health and Human Services of their objection, and this initiates the process of providing the mandated coverage to employees.

The Little Sisters of the Poor provide free and compassionate care to over 13,000 poor elderly people around the world, and they argue that complying with the accommodation would violate the very faith that motivates them to serve.

The sisters maintain that forcing them to choose between their faith or paying crippling fees violates the Religious Freedom Restoration Act, which prohibits the government from substantially burdening the free exercise of one’s religion unless it can show the burden is the least restrictive means of furthering a compelling government interest.

The 10th Circuit should issue a decision in the coming months, but another recent accommodation case didn’t turn out so well.

On Nov. 14, the D.C. Circuit Court of Appeals ruled against the Catholic University of America and a group of other Catholic organizations led by Priests for Life in their challenge against the accommodation.

Some organizations are fighting back against the accommodation because it simply shifts responsibility for purchasing coverage away from the employers, and it is still the employer’s action that triggers the objectionable coverage. This bureaucratic tweak to the accommodation, issued this past August, still does not adequately protect the religious freedom of many charities, schools and other religious organizations.

Writing for the court, Judge Cornelia Pillard found that CUA and Priests for Life failed to show that the accommodation substantially burdens their religious exercise. Instead, Pillard concluded that the only harm was Priests for Life’s feelings of being genuinely “aggrieved by their inability to prevent what other people would do….” Pillard recognized that though the accommodation may violate the challengers’ conscience, it allows the challengers to “wash their hands of any involvement in providing insurance coverage for contraceptive services.”

What Judge Pillard calls “a bit of paperwork” is exactly what Priests for Life find morally wrong.

Essentially the court determined that the accommodation is fine because it doesn’t directly force the groups to violate their conscience.

Yet a regulation can still be a substantial religious burden even if the effect is only indirect.

The U.S. Supreme Court said as much in Thomas v. Review Board over 30 years ago. In this case, a Jehovah’s Witness steelworker was denied unemployment benefits after quitting his job because he was transferred to a part of his company that made weapons. Because of his belief in non-violence, Thomas could not participate in the manufacture of weapons. In siding with Thomas, the Supreme Court noted that “[I]t is not within the judicial function and judicial competence to inquire whether [Thomas] correctly perceived the commands of [his] faith. Courts are not arbiters of scriptural interpretation.” Instead, the Court would defer to a religious believer’s interpretation unless the claim was so bizarre or had a non-religious motivation, elements even the government concedes do not apply to Priests for Life or the Little Sisters of the Poor.

Thus, what Judge Pillard calls “a bit of paperwork” is exactly what Priests for Life find morally wrong.

What may seem trivial to one person may give rise to a serious religious dilemma for another. For example, Orthodox Jews may not flip light switches or press buttons on the Sabbath.

In short, courts should not be in the business of line-drawing when it comes to theological questions. Though the Obama administration won the round in the battle over the abortion-inducing drug mandate before the D.C. Circuit, the fight continues with the Little Sisters of the Poor.