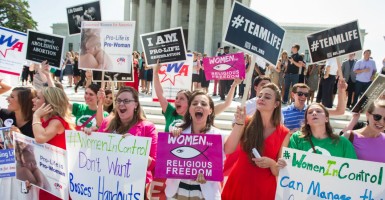 Pro-life supporters cheer the 5-4 ruling by the US Supreme Court in favor of Hobby Lobby, the craft store chain that challenged the Affordable Care Act's mandate that employee health plans include pregnancy preventive services, in Washington, DC, USA, 30 June 2014. This was the first major legal challenge to Obamacare in two years. (Photo: Jim Lo Scalzo/EPA/Newscom)

Thursday, the Eighth Circuit Court of Appeals ruled in favor of a challenge to the Affordable Care Act requirement that employers offer their employees health care coverage that includes Plan B, ella, and other potentially life-ending drugs and devices—or fill out a form notifying the Department of Health and Human Services of their religious objection to providing such coverage.

The Obama administration considers this second option as accommodating the employer’s religious beliefs because the notification initiates the process of insurers and third-party administrators providing the mandated coverage at no cost to the insured.

CNS International Ministries, a nonprofit that serves people with substance abuse and behavioral issues, and Heartland Christian College, which provides education to individuals in CNS’ recovery program, argue that this so-called accommodation violates the federal law that prohibits the government from substantially burdening the free exercise of religion. They maintain that the accommodation imposes such a substantial burden by triggering morally objectionable health care coverage, so they are not insulated from complicity in the facilitation of these drugs and devices.

A three-judge panel of the Eighth Circuit agreed—becoming the first appeals court to rule in favor of religious freedom in the many cases against this regulation. The court issued a second opinion in a related case, relying on the reasoning of its CNS and Heartland decision.

The panel found that the burden on CNS’ and Heartland’s religious exercise “mirrors the substantial burden recognized by the Supreme Court in Hobby Lobby.” They face “the same consequences for noncompliance,” including “substantial monetary penalties.”

Refusing to comply comes with the threat of devastating fines up to $100 per employee per day. The panel reiterated the Supreme Court’s observation in Hobby Lobby that “[i]f these consequences do not amount to a substantial burden, it is hard to see what would.”

The government argued that federal law—not the accommodation—triggers facilitation of the objectionable drugs and devices, so the challengers are simply mistaken about the effect of their actions in the accommodation process. A number of other courts bought this argument, but the Eighth Circuit panel saw it differently:

“If [third party administrators] had a wholly independent obligation to provide contraceptive coverage to religious objectors’ employees and plan beneficiaries, there would be no need to insist on CNS and HCC’s compliance with the accommodation process.” The panel further pointed out that the fact that CNS and Heartland do not “arrange or pay for objectionable contraceptive coverage is not determinative of whether the required or forbidden act is or is not religiously offensive.”

Reiterating what the Supreme Court held in Thomas v. Review Board (1981), the panel said that their review must be limited because a “religious objector is entitled to ‘draw a line’ regarding the conduct that his religion deems permissible.” It is not for judges to dissect an objector’s religious beliefs, but rather to determine if the line drawn “reflects ‘an honest conviction.’”

For CNS and Heartland, submitting forms to the government or their third-party administrator to initiate the objectionable coverage falls on the wrong side of this line.

Though federal law protects against substantial burdens on free exercise, the government may overcome this if it can show that a burden is the least restrictive means of furthering a compelling interest.

The Eighth Circuit panel noted that the government must “come forward with evidence that the contraceptive mandate and the accommodation process are the only feasible means to distribute cost-free contraceptives to women employed by religious organizations and that no alternative means would suffice to achieve its compelling interest.”

This may, however, be an uphill battle for the government in light of the Supreme Court’s orders temporarily allowing three other challengers to notify the government of their objections using an “arguably less onerous” method.

Likewise, as Justice Samuel Alito discussed in Hobby Lobby, the government could provide or pay for the drugs and devices itself, while allowing these employers to obey their conscience. Thus, it may be difficult for the government to show that there are no alternatives.

This decision creates a split among the circuit courts, which had all ruled in favor of the government. This division increases the likelihood that the Supreme Court will agree to review one or more of these cases.

With seven other cert. petitions already pending, the Court may decide to add this issue to its upcoming 2015-2016 term.