Will Tie Votes on the Supreme Court Be a Problem? These 2 Justices Don’t Think So. 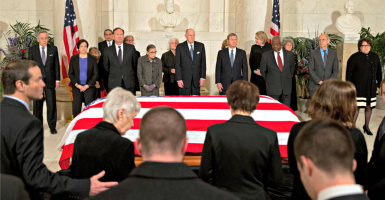 For more than a century, the Supreme Court’s bench has had nine spots, enough to round out the roster of a baseball team. With the death of Antonin Scalia, eight justices remain.

Now President Barack Obama and his fellow Democrats are pushing Republicans to OK an Obama recruit to replace Scalia. But Republicans say the court can field cases with eight justices until the next president fills the slot of Scalia, a conservative known for his “originalist” interpretation of the Constitution.

In the past week, two justices—one conservative, one liberal—said in public remarks in Washington, D.C., that the court could get along just fine for as long as it takes.

“We will deal with it,”  Justice Samuel Alito said Tuesday while answering a question from an audience at Georgetown University law school about Senate Republicans’ determination not to advance any Obama nominee.

“We’ll miss him, but we’ll do our work,” Justice Stephen Breyer said of Scalia during an appearance Thursday at the Newseum to talk about his new book.

“The cases come along,”  Breyer added, according to NBC News.

>>> Republicans on Judiciary Committee Slam Door on Any Obama Nominee

The court’s current lineup makes a 4-4 split possible, since half of the justices were nominated by Republican presidents and the other half by Democrats. In the case of a tie, the lower court’s ruling stands.

According to the White House, that scenario “will be harmful and create unsustainable uncertainty” because “4-4 decisions have no value in establishing precedent on which future decisions can rely.”

Without confirming a replacement nominee, the White House warns, the Senate will create “uncertainty—for the law, for individuals liberties, and for our economy.”

But historically, half of the Supreme Court’s decisions are unanimous, Breyer told NBC News justice correspondent Pete Williams during the Newseum event.

Perhaps 20 percent are decided by a tie-breaking 5-4 vote, he said.

“For the most part, it will not change,” Breyer said.

Alito reminded his law school audience that the court previously has functioned with an even number of justices, CBS News reported. He noted the high court’s size isn’t prescribed by the Constitution.

Originally, six justices sat on the court before it expanded to nine.  At one point during the Civil War, Congress added a 10th seat.

“They must have been more agreeable,” Alito quipped.

Some legal experts predict a measurable impact from Scalia’s absence in 2016. Six landmark cases will come before the Supreme Court regarding abortion, affirmative action, religious liberty, unions, and voting rights.

President Ronald Reagan appointed Scalia to the court in 1986.

Democrats blame Republicans for keeping the court understaffed and unable to handle a queue of controversial cases without a full bench.

Blumenthal’s opinion isn’t shared by his Republican colleagues on the Judiciary Committee, which considers and votes on all presidential nominations to federal courts.

The same day Alito made his remarks at Georgetown University,  Hatch and the committee’s 10 other Republicans released a letter to Senate Majority Leader Mitch McConnell affirming their intent not to advance a nominee until after Obama’s successor takes office Jan. 20.

Carrie Severino, chief counsel at the Judicial Crisis Network, agrees with Hatch. Even if the Senate confirmed a justice, he or she wouldn’t join the bench in time to cast a tie-breaking vote, she said.

“If they were literally confirmed overnight, [the justice] wouldn’t hear most of the cases this term,” Severino told The Daily Signal.

Severino, a former clerk to Justice Clarence Thomas, said any nominee confirmed by the Senate this summer likely would begin work when the court begins hearing cases again in October.

That’s “practically during the presidential election,” she said.

The Supreme Court met Monday for the first time since Scalia’s unexpected death at age 79 on Feb. 13 and a funeral Mass last Saturday. His seat on the bench was draped in black.

The court previously has not ground to a halt without nine justices at the helm. When justices die, retire, or recuse themselves from a case, the court continues with regular business.

As a new justice in 2010, Elena Kagan recused herself from 25 cases in which she concluded her past experience as a solicitor general created a conflict of interest. One was a major case concerning affirmative action in higher education, Fisher v. Texas.

Alito, like many other justices, has recused himself in more than a dozen cases because of his financial investments.

If Republicans get their way, the court would be without nine justices for more than 10 months. But Hatch and other Republicans says that’s the only fair thing to do.

“Look, it’s not the end of the world [to leave Scalia’s seat open],” Hatch told CNN’s Chris Cuomo. “As a matter of fact, it’s a smart thing to do rather than be in the middle of … a presidential election that is so complicated and aggressive as this one.”

“Let’s wait until the next president, whether a Democrat or Republican, can have the right to nominate,”  he said.