Should a College Be Held Accountable for Violating a Student’s Freedom of Speech? This Supreme Court Case Will Decide 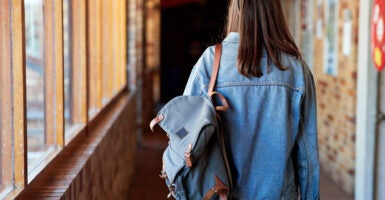 The Supreme Court will consider Uzuegbunam v. Preczewski early next year. This case has the potential to advance freedom of speech rights for students on campus. (Photos: Klaus Vedfelt/Getty Images)

Do students suffer meaningful harm when a college prohibits them from speaking about their faith on campus? Should courts protect students’ constitutional rights even where it is impossible to monetarily quantify any harm they suffered?

And should colleges avoid responsibility for constitutional violations because students graduate after a relatively short period of time?

The Supreme Court will consider these questions when it hears the case Uzuegbunam v. Preczewski early next year.

The plaintiff, Chike Uzuegbunam, was a student at Georgia Gwinnett College who wanted to share his faith with classmates. He followed proper procedures and reserved the school’s “free speech zone” to do so.

When Uzuegbunam tried to publicly express his faith from the free speech zone, however, school officials demanded that he stop. They accused him of “disorderly conduct” because other students complained.

Uzuegbunam and a second student silenced by the college, Joseph Bradford, sued Georgia Gwinnett College for violating their First Amendment rights. The school initially claimed that religious speech equaled “fighting words” that aren’t protected by the First Amendment, but eventually abandoned this absurd defense and changed its unconstitutional policy.

The federal District Court for the Northern District of Georgia spent over a year deciding the case. When it issued its opinion, the court dismissed the case as moot because Uzuegbunam had graduated while it considered the case. It dismissed Bradford’s claims because the school changed its speech policy.

The court reasoned that if it decided the case, its opinion would have “no practical effect on the parties’ rights or obligations.”

Neither Uzuegbunam nor Bradford had requested precise monetary damages because the dollar value of speaking one’s conscience is difficult to quantify. Constitutional freedoms, after all, are priceless. So the two students requested “nominal damages,” a legal remedy that courts traditionally use to vindicate constitutional rights.

A decision requiring Georgia Gwinnett College to pay nominal damages would acknowledge the constitutional violations and create a precedent that could prevent it or other schools from subjecting students to similar injustices in the future.

Such a decision also would have ensured that school officials could be liable for damages if they repeated their bad behavior. A legal doctrine known as “qualified immunity” ensures that government officials are immune from damages unless they violate “clearly established law.”

Under the lower court’s reasoning, a school can block attempts at creating clearly established law by strategically retreating from unconstitutional policies or by engaging tactics that delay a case until a suing student graduates.

This situation is particularly dangerous for adherents of minority faiths. This case could make it easier for government actors to get away with violating their constitutional rights because the harm that they suffer when a law infringes on their religious beliefs may be impossible to quantify.

The rule adopted by the 11th U.S. Circuit Court of Appeals in this case could render claims such as Ben-Levi’s moot since it is almost impossible to put a price tag on the harm he suffered. The prison then would be free to adopt a similar policy later that again prevents Jewish prisoners from studying together.

If the prisoners wanted to challenge that policy, they would be forced to start from square one. Religious adherents should not be forced to engage in such gamesmanship in order to see their rights vindicated.

It should therefore come as no surprise that organizations, including the Jewish Coalition for Religious Liberty, the American Humanist Association, and Catholic and Islamic groups, filed friend-of-the-court briefs criticizing the decision’s reasoning and impact. Those groups may not agree on much, but they all recognize that this decision would harm Americans’ civil rights.

When the government behaves unconstitutionally, it tramples on rights that Americans hold most sacred. This is especially true when a powerful government entity violates the fundamental rights of “the little guy,” an ordinary American citizen.

It is in those cases that the judiciary plays a vital role in protecting against government misconduct. In the upcoming case, Uzuegbunam v. Preczewski, the Supreme Court can send a clear message that lower courts cannot shirk that responsibility.

Courts must protect Americans’ civil rights even in cases where there is no easily quantifiable monetary harm.