Kentucky Should End All Ties to Obamacare 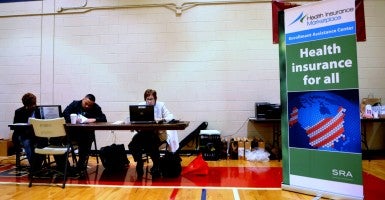 Newly elected Kentucky Gov. Matt Bevin announced his plans to keep the Obamacare Medicaid expansion (and the extra federal money funding it) and to pursue waivers that will introduce reforms to Medicaid.

The governor should rethink this decision.

Not only will these efforts likely result in only modest reforms, but more importantly, they will put the state at odds with a Congress committed to reining in federal Medicaid spending and repealing Obamacare.

In January, Congress sent to President Barack Obama legislation that repealed core provisions of Obamacare. Specifically, it ended Obamacare funding for the Medicaid expansion and funding for the premium and cost-sharing subsidies and the individual and employer mandates, as well as most of the taxes used to offset the new spending. Yes, this president vetoed that legislation, but it was important exercise, because it showed that under another administration, one that shares the Congress’ commitment for repeal, it can be done.

Repeal is not the only place where states that expand Obamacare are at odds with Congress.

Medicaid, along with the other health care entitlement programs, is a major driver of our country’s fiscal crisis. The Congressional Budget Office just released its annual economic forecast for the country, warning that federal deficits are rising and revising its Medicaid spending projections upward. Of course, the higher Obamacare matching rates to the expansion states are contributing to this trend.

The House and Senate understand that reining in federal spending specifically on health care entitlements is the only way to get the country’s fiscal house in order. Their recent budgets reflect that by not only repealing the Medicaid expansion funding, but also scaling back overall federal spending on Medicaid.

The governor has said he will focus his attention on improving the delivery of care and hopes to use the waiver process to inject more conservative reforms. Yet the Obama administration’s waiver concessions are marginal at best and further entangle the states into the Obamacare framework.

Bevin reported that the previous administration left traditional Medicaid with a shortfall. Yet preserving the Medicaid expansion only makes digging out of the hole harder by dumping millions more on an already overstretched program. Heritage estimates found that in Kentucky, any short-term state budget savings from expanding Medicaid would be quickly outpaced by increased costs.

Rather than preserving the Obamacare Medicaid expansion, the state should end its reliance on the Obamacare Medicaid funding, unwind its Medicaid expansion, and limit Kentucky’s exposure to the risks posed by the uncertainty of Obamacare and its federal funding. From there, the state could consider waivers to reform the underlying program and tailor a plan to transition the expansion population into a truly Kentucky-style model that is not dependent on a federal funding stream that is driving up deficits and the country into debt.

The Obama administration recognizes that its core legacy of Obamacare will be the Medicaid expansion, which is why the president is now proposing to extend the enhanced federal funding for Medicaid expansion in the hope of enticing the remaining hold-out states to take the bait. But that is fool’s gold, as this Congress is surely set to reject it.

Heritage research has confirmed that the net increase in health insurance coverage under Obamacare has been due almost entirely to expanding Medicaid. Of the 9.25 million Americans who gained coverage in 2014, 8.99 million gained coverage through Medicaid. In the private market, while the number of people with individual insurance increased by 4.79 million, the number of people with employer group coverage dropped by 4.53 million—for a net increase in private coverage of only about 260,000 people.

According to the Centers for Medicare and Medicaid Services, Kentucky’s experience has been similar to the national, with Medicaid enrollment swelling by over half a million individuals (from 606,805 in September of 2013 to 1.150 million in September 2015) while only 86,649 people enrolled in its state exchange.

To his credit, Bevin is disentangling the state from the Obamacare exchanges by moving forward to transfer the administration of Kentucky’s exchange to the feds (Healthcare.gov). But Obamacare sympathizers are cheering the governor’s decision to keep the Obamacare Medicaid expansion in place because it feeds the narrative that Obamacare is here to stay.

Bevin has the opportunity to help clear the path to repeal by cutting Kentucky’s ties to the Obamacare Medicaid expansion and its money—and he should.