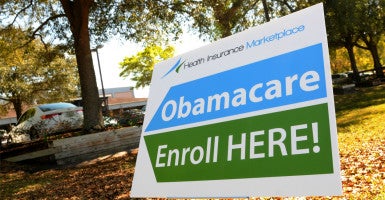 In a new blow to Obamacare, the Kentucky Health Cooperative has decided not to offer health insurance plans for 2016.

“It is with sadness that we announce this decision,” said Kentucky Health Cooperative interim CEO Glenn Jennings in a statement. “This very difficult choice was made after much deliberation. If there were a way to avoid it and simultaneously do right by the members, providers and all others that we serve, we would do so.”

Under the 2010 Affordable Care act, 23 health exchange co-ops were created. Kentucky Health is the fifth co-op to go under.

“In plainest language, things have come up short of where they need to be,” Jennings added.

The organization relied on federal risk corridor funding (from a program under the Affordable Care Act designed to provide stability in the health care market), of which Kentucky Health Cooperative did not receive enough dollars to keep in business.

The Kentucky co-op had received over $146 million in federal loan money.

CEO of the National Alliance of State Health Co-ops Kelly Crowe stated that the Kentucky co-op’s halt to offer health plans “is a direct result of lower-than-promised risk corridor payments that were announced last week.”

“At this time, assuming full collections of risk corridors charges, this will result in a proration rate of 12.6 percent.”

In other terms, the Center for Medicare and Medicaid Services will reimburse 12.6 percent ($362 million of the $2.87 billion) requested from co-ops. The Kentucky co-op will receive $9.7 million compared to its requested $77 million.

“It is further evidence that the so-called ‘3Rs’—programs designed to stabilize the marketplace—are not working as the Affordable Care Act envisioned,” Crowe said in a statement released Friday. “Furthermore, regulatory obstacles have made it virtually impossible for the state health co-ops to raise additional capital to support growth, which would potentially offset the shortfall in the obligations of the federal government.”

In 2014, 22 of the 23 co-ops under Obamacare lost money. The Kentucky co-op lost $50 million that year. The first half of 2015 showed a significant drop in losses for the co-op but still remained at a $4-million loss.

“We were on track to reverse direction and begin operating in the black, and we expected this to come about in 2016,” Jennings said.

Kentuckians can purchase their health plans through the state’s online health marketplace, Kynect.

There are currently 14 state-run health exchange programs, including Washington, D.C., like Kynect, that operate under Obamacare. Individuals can “shop” the marketplace to compare health plans. The federal government runs, or partially runs, exchanges in all other states.

“Barely a week goes by that we don’t see another harmful consequence of this poorly conceived, badly executed law,” Senate Majority Leader Mitch McConnell, R-Ky., said in a statement. “Despite repeated Obama administration bailout attempts, this is the latest in a string of broken promises with real consequences for the people of Kentucky who may now be losing the health insurance they had and liked twice within the past three years because of Obamacare’s failures.”

The Kentucky co-op will conduct “business as usual for policyholders through December 31, 2015.”