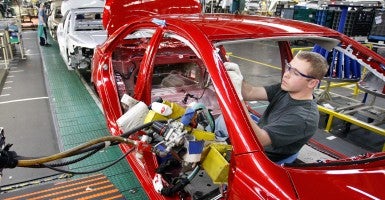 Kentucky is not a right-to-work state, but one of its counties soon may be.

Local officials in Warren County are to vote Friday on a measure that would remove the requirement that workers in some jobs must join a union and pay union dues as a condition of employment.

A first reading of the measure in Warren County Fiscal Court passed with a 5-1 vote with only magistrate Tommy Hunt, a Democrat, voting against it. The second reading scheduled for Friday will be immediately followed by a formal vote. An affirmative vote is widely expected.

Being without right-to-work status puts Kentucky at a “competitive disadvantage” that often results in “lost business opportunities,” Mike Buchanon, the Warren County judge-executive, told The Daily Signal in an interview.

Buchanon said “site-selectors” who are hired by companies to identify places to build factories and other workplaces have told him right-to-work was a critical factor in determining which regions and states receive new economic development.

Kentucky Is the Odd State Out

“We’ve been losing out to Tennessee, Georgia, Alabama, Mississippi and now Indiana and Michigan,” he said. “Who would have thought that Indiana and Michigan would become right-to-work states before Kentucky? I felt like time had passed us by, which is why we had to act at the local level.”

“We’ve been losing out to Tennessee, Georgia, Alabama, Mississippi and now Indiana and Michigan,” says one Kentucky right-to-work supporter.

Republican lawmakers have tried to enact this reform at the state level without success. And since Democrats retained the majority in the Kentucky House of Representatives in November’s elections, it will be at least two more years before the legislation would have a chance in Frankfurt.

Which is why local lawmakers took matters into their own hands.

“The unions have such a stranglehold on certain segments of the political spectrum once you get up to high office holders, and they don’t want to be at odds with the unions,” said Jim Henderson, the Republican judge-executive in Simpson County. “They can be very vocal and persuasive at election time. But the story is different at the local level.”

Indeed, all the magistrates in Simpson and Fulton counties who were part of the unanimous votes in favor of right to work are Democrats. In Warren County, two Democratic magistrates joined with two Republican magistrates, and with Buchanon, who also is Republican, to pass the first reading.

The “broad, bipartisan support” for right to work evident at the local level is motivated in part by the need to become “more competitive,” Henderson suggested.

“My county sits across the border from Tennessee and people in both parties understand that we are losing out on business opportunities,” he said. “We have a strong manufacturing base and a lot to offer, but Tennessee is right to work and we are not.”

But do counties have the legal authority to advance right-to-work laws in the absence of state-level legislation?

Eldon Renaud, president of United Auto Workers Local 2164, does not think so.

“It’s clear to me that this can only be done through state law,” he said.

There are two court cases invalidating local right-to-work laws that back up Renaud. They are Kentucky State AFL-CIO v. Puckett, decided by the Court of Appeals of Kentucky, and New Mexico Federation of Labor v. Clovis, decided by the U.S. District Court for the District of New Mexico.

But Jason Nemes, an attorney in Louisville who is coordinating the legal defense of the ordinances, says Section 14B of the 1947 Taft-Hartley Act allows states to delegate the authority to pass right-to-work laws through “home rule” to their political subdivisions such as counties.

“The Supreme Court had said numerous times that local ordinances are included when a federal statute says state law, unless otherwise expressed by Congress,” Nemes told The Daily Signal in an email. “This is because counties derive their authority and actual existence from the state’s sovereignty and have been established by the state to help govern the state. This is particularly true in states like Kentucky, where the state legislature has delegated significant authority to counties by enacting what is known as “home rule” statutes.”

“I don’t think the people pushing this are doing this for working people,” Renaud said. “They just want to destroy unions.”

“The fastest growing union activity is in right-to-work states,” he said. “So this is not anti-union, it’s about giving people a choice. They can certainly join the union if they want to, but it should not be a requirement.”

“What we are seeing in response to the action in Warren County is very encouraging from a right-to-work perspective,” said James Sherk, senior policy analyst in labor economics for The Heritage Foundation.

“This is now cascading into other parts of the state, and I expect that these local initiatives will continue to gain momentum,” Sherk added. “Those counties in Kentucky that are not right to work will begin to feel pressure not just from neighboring states but from neighboring counties inside the state. Local officials have a strong self interest in improving their competitive position and this is one way to do it.”