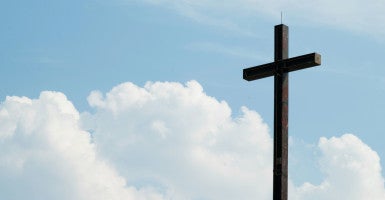 “It is an example of how the left, with government help, seeks to coerce people of faith to either abandon their schools, hospitals, orphanages, and positions of public trust or abandon their beliefs about marriage," The Heritage Foundation's Roger Severino says. (Photo: iStock)

A court ruling against a Catholic girls school that declined to hire a gay man in a non-classroom job highlights the need for such religious institutions to do a better job of spelling out their teachings and expectations for potential employees, a Catholic educator said.

“Parents and extended family members who entrust their children to a faith-based institution expect consistent messages and integrity of teaching from the church and the school,” Denise Donohue, deputy director of K-12 programs for the Cardinal Newman Society, told The Daily Signal.

Donohue’s comments came after a Massachusetts state judge ruled that the Catholic school discriminated against a gay man by retracting a job offer upon learning his sexual orientation.

Fontbonne Academy had offered a position to Matthew Barrett as a food services director in 2013. Before doing so, the private school said, officials told Barrett that all employees were assumed to exemplify Catholic teachings and values, and he agreed to those terms.

The school revoked the job offer after Barrett listed his husband on the employment form as his emergency contact.

The Boston-based legal group Gay & Lesbian Advocates & Defenders (GLAD), which represented Barrett in a lawsuit against Fontbonne Academy, said the job of food services director is unrelated to religion.

Lawyers for Fontbonne Academy argued that Barrett’s same-sex marriage was “inconsistent with the teachings of the Catholic Church,” and as a result, he was ineligible for employment with the school.

“What they did was blatantly wrong, and they violated a Massachusetts law,” Barrett told The Boston Globe. “They felt that being a Catholic-affiliated school that they can do that legally, and they can’t.”

But Donohue, the Catholic educator, disagrees.

“Acquiescing to the hiring practice of employing adults who question and live outside of church teaching, even in non-teaching roles, undermines the enculturation and formative efforts of the school at a time when children are most impressionable,” Donohue told The Daily Signal.

She said students’ interactions compose the “fabric” of the daily school experience and are influenced by teachers, volunteers, visitors, and parents alike.

“This ruling has torn a hole in that fabric and impinged a governmental and societal ideology upon the daily formation and educative experience of the student, thereby jeopardizing the autonomous religious operations and formative practices of all faith-based institutions,” Donohue said.

The court ruling issued by Wilkins said Fontbonne disregarded Massachusetts’ anti-discrimination law. It also said that because the school accepts students of all faiths, it is not exempt as a religious institution.

Roger Severino, director of the DeVos Center for Religion and Civil Society at The Heritage Foundation, said the decision is inconsistent with what the U.S. Supreme Court has determined. Severino told The Daily Signal:

Personnel is policy, and common sense tells us that an all-girls Catholic school should not be forced by the government to hire people who publicly reject central church teachings about marriage. The Supreme Court has repeatedly affirmed the right of private organizations, especially religious ones, to choose the people who carry their messages, but this decision departs from settled law.

The Catholic Action League of Massachusetts said in a formal statement that the decision is a “frontal assault on religious freedom,” arguing it violates both the First Amendment and the Declaration of Rights in the state constitution.

“It is an example of how the left, with government help, seeks to coerce people of faith to either abandon their schools, hospitals, orphanages, and positions of public trust or abandon their beliefs about marriage,” Severino said of the ruling. “If we still believe in the First Amendment, then no one should be afraid to live out their beliefs about marriage for fear of lawsuits and government penalties.”

She said some Catholic dioceses already have implemented exclusionary statements and practices, in addition to providing fundamental documents outlining employee expectations and church teachings, as references for applicants.

“This is currently best practice, and with rulings such as this, we will probably see more of it.”