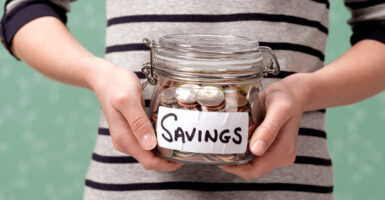 America's Christian Credit Union offers an alternative to big banks and it's helping the school choice movement through the formation of new schools and assistance to parents. (Photo: Getty Images)

In this age of cancel culture, nothing is off limits for the woke left.

Christians and conservatives increasingly find themselves on the defensive. Deplatforming and censorship are the norm on social media. In fact, it happened to The Daily Signal just last week for allegedly violating YouTube’s COVID-19 “misinformation” policy.

And while having a video removed or a Twitter account suspended is deeply problematic, it’s not nearly as insurmountable as when your financial institution decides to cancel you.

That happened earlier this month in Canada when Toronto-Dominion Bank froze two personal accounts with $1.1 million over support for the “Freedom Convoy” protest against the country’s vaccine mandates.

Unfortunately, that’s now a reality in the United States, too. Last November, JPMorgan Chase subsidiary WePay—an online payment processor—canceled the account of a conservative PAC in Missouri after it scheduled an event with Donald Trump Jr.

>>> Left Doesn’t Just Want to Censor You on Social Media. It Also Wants to Close Your Bank Accounts.

It’s one of many troubling cases involving financial institutions, according to Todd Zywicki, a law professor at George Mason University, who wrote in Newsweek:

WePay’s actions followed a series of similar incidents in recent years that includes the cancellation of former president Trump’s personal bank account, Michael Flynn’s credit cards and at least one Christian nonprofit organization. The fossil fuel and firearms industries have been targeted too. Businesses selling controversial materials have had their payments services terminated and consequently shuttered.

While big banks and financial institutions cave to the woke left, there are fortunately alternatives in the marketplace. America’s Christian Credit Union, founded in 1958, is one.

On today’s episode of “The Daily Signal Podcast,” Frank Clement, the credit union’s director of strategic partnerships, explains how things have changed in recent years and why America’s Christian Credit Union remains true to its mission.

Clement also shares how the COVID-19 pandemic has reshaped the education landscape and created an unprecedented opportunity for school choice. America’s Christian Credit Union is attempting to do its part by helping the formation of new schools and providing financial assistance to parents.

Listen to today’s show at the link below.