Do Charters Drain Funds From Pennsylvania’s Traditional Public Schools? In a Word, No. 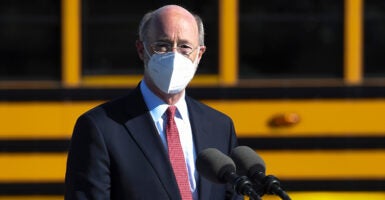 Amber Northern is senior vice president for research at the Thomas B. Fordham Institute in Washington, D.C.

Lenny McAllister is the CEO of the Pennsylvania Coalition of Public Charter Schools and a senior fellow at the Commonwealth Foundation.

In early February, Pennsylvania Gov. Tom Wolf delivered his 2020-21 budget address and revealed what many of us already knew: He doesn’t have much love for charter schools.

He characterized them as “fronts for private management companies” whose only innovations involve “finding new ways to take money out of the pockets of property-tax payers.”

Using enrollment and fiscal data reported by traditional school districts between 2001 and 2018, the study assessed in 21 states the relationship between the percentage of students enrolled in independent charter schools and the finances of the school districts in which they are located (or “hosted”).

The key finding? Contrary to charter critics’ preferred narrative, total revenues per pupil increased in most states as the percentage of local students who enrolled in charter schools rose.

Importantly, those increases weren’t caused by changes in student demographics. Put another way, they weren’t due to higher shares of district students who were from low-income households, eligible for special-education services, or classified as English language learners. So, what explains the increase?

According to University of Arkansas researchers, “The state funding formula for charter schools begins with the same amount of funding as a charter school’s home district, but then subtracts up to 21 categories of prior-year district expenditures,” resulting in a funding disparity that favors districts.

In other words, the host districts get to keep the subtracted funds. What’s more, for part of the time period our study covered, Pennsylvania had an expensive policy that gave extra funding to traditional schools that experienced enrollment losses to charters (though the policy was scrapped in the wake of the 2008 financial crisis).

In short, districts were actually being paid more to educate fewer students.

Now, Wolf is demanding changes to Pennsylvania’s charter school law that would leave charter schools with even fewer dollars. According to news sources, the new funding formula would take about $280 million currently due to charters and transfer it to school districts.

Special-education services for charter students would be particularly affected.

Having school districts “pass through” funds to charter schools they don’t operate ensures that charters will be nickeled-and-dimed at every opportunity, as will having a governor who is equally hostile to providing families with educational options.

Sadly, that means the 169,000 Pennsylvania students (and counting) who attend public charter schools this school year are in for even more heartache than the coronavirus pandemic has already mercilessly dealt them.