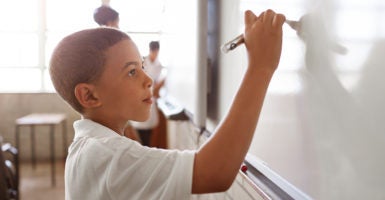 Parents look for many things in a school: strong academics, engaging extracurricular activities, and quality teachers who offer one-on-one help to their kids.

But increasingly, parents are adding safety to their list: They want a school where their children will feel safe.

Safety is a growing concern for parents. A 2017 Gallup survey found that 3 in 10 parents are concerned for their children’s safety at school. And it’s no wonder, given what kids are experiencing.

Another 10% said they missed school because they felt unsafe at school or during their commute.

It’s no surprise that parents, such as those surveyed in Florida and Indiana, ranked school safety as one of the top three most important school characteristics.

And when parents grow concerned, policymakers begin to take note.

Last year, Rep. Jim Banks, R-Ind., proposed a bill introducing child safety accounts. These accounts would help D.C. children who are the victims of bullying, sexual harassment, or violence to pay for tuition, tutoring, books, transportation, and therapy so that they could move to another school.

Since D.C. is under the jurisdiction of Congress, these accounts are an appropriate federal measure.

This proposal would build on existing school choice options in Washington, D.C., including the D.C. Opportunity Scholarship Program, which provides vouchers to children from low-income families to attend a private school of choice.

The D.C. proposal takes a cue from Florida, where the Hope Scholarship Program allows students who are bullied or the victims of physical attacks to transfer to a school of their choice.

Charter schools are another solution for parents looking for safe schools.

In Denver, researchers found that school safety was third among 18 factors that parents considered when applying to the city’s charter schools. Likewise, in Pennsylvania, teachers ranked safety as the fourth most important reason (out of 10) for seeking employment at a charter school.

Parents want their children to learn and grow in safe school environments. The expansion of charter schools, education savings accounts, and other school choice options means giving power to parents to choose schools that are the right fit for their children.

Consistent with Robert Maslow’s hierarchy of needs, parents will prioritize school safety over other school characteristics like academic achievement. As Milton Friedman noted in his book “Free to Choose,” “Parents generally have both greater interest in their children’s schooling and more intimate knowledge of their capacities and needs than anyone else.”

National School Choice Week is an opportunity for policymakers to trust to families to make the best choices for their children’s educations.