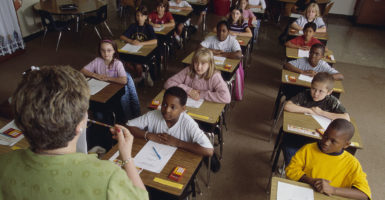 "What has been especially remarkable is that it has been the most educationally successful charter schools that seem to have drawn the most hostility, both in words and in deeds," Thomas Sowell says in his new book "Charter Schools and Their Enemies." (Photo: Will & Deni McIntyre/Getty Images)

The most common form of that hostility are simple legal limits set on the number of charter schools permitted without regard to whether charter schools are producing good or bad educational outcomes.

The education establishment, having the nation’s most powerful labor union, has the ears of political leaders. They see a huge loss potential if more parents are able to opt out of poorly achieving public schools.

A substantial decline in traditional public school attendance would mean fewer teachers employed. That would mean declining union dues since most charter school teachers are not union members.

Sowell points out that not all charter schools are successful. Failing charter schools can have their charters revoked, cutting off access to public funds. That is in stark contrast to failing and corrupt traditional public schools that continue to dine at the public trough.

New York City Mayor Bill de Blasio explicitly campaigned against charter schools, saying: “I am angry about the privatizers. I am sick and tired of these efforts to privatize a precious thing we need—public education.

In another venue, Sowell said: “We keep hearing that ‘black lives matter,’ but they seem to matter only when that helps politicians to get votes, or when that slogan helps demagogues demonize the police. The other 99% of black lives destroyed by people who are not police do not seem to attract nearly as much attention in the media.”

At a 2016 meeting, the NAACP’s board of directors ratified a resolution that called for a moratorium on charter schools. Among the NAACP’s reasons for this were that it wanted charter schools to refrain from “expelling students that public schools have a duty to educate” and “cease to perpetuate de facto segregation of the highest performing children from those whose aspirations may be high but whose talents are not yet as obvious.”