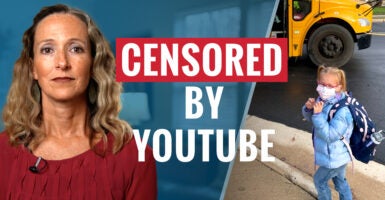 Merianne Jensen went viral earlier this month when she made a passionate speech about COVID-19 mask mandates affecting kids at school. (Photo graphic: The Daily Signal)

Once again, Big Tech is deciding which voices can speak out and which ones can’t. The latest victim is a mom of four from Virginia whose interview with The Daily Signal was removed Thursday by YouTube.

Merianne Jensen went viral earlier this month when she made a passionate speech about COVID-19 mask mandates affecting kids at school. Jensen was addressing the school board of Prince William County, a Virginia community in the Washington, D.C., suburbs.

“You are on the losing side of history and it’s time to make that right before these children now,” she told the school board. So far, a video of her speech tweeted by The Daily Signal has garnered 1.6 million views.

Shortly after Jensen spoke to the Prince William County School Board, my colleagues Lauren Evans, Mark Guiney, and Philip Reynolds interviewed her. They thought our audience would want to learn more about what inspired this mom, and why she was opposed to mask mandates in schools.

In other words, they were acting like true journalists.

The Daily Signal produced a compelling video, splicing Jensen’s school board speech with her interview. We let her explain how masks had affected her kids.

“My son came home the first day of school with an extreme headache, and went to bed with a stomachache because he was so anxious,” she told us, adding, “For two weeks, he came home with a headache.”

“We took him to the doctor,” she recounted, and “it was all because of the mask.”

But now you can’t see that video on YouTube.

“Specifically, the video includes a claim that ‘COVID is not being spread in the classrooms, it is not being spread by children,’ and our policies prohibit content claiming that any group or individual cannot transmit the virus,” the representative added.

First of all, let’s be clear: Jensen was speaking as a mom, not as a doctor or a medical professional.

Secondly, this is yet another example of only one side being targeted over “misinformation.” As Daily Signal reporter Mary Margaret Olohan chronicled recently, plenty of “experts” have made dubious claims about COVID-19, yet faced no censorship. Whether it’s the New York Post scoop on Hunter Biden’s laptop or a pediatrician speaking the truth about transgenderism in a Daily Signal video, it’s only conservative views that get censored by Big Tech.

“Big Tech is showing us they have no pretense of objectivity anymore. What they offer is a two-tiered ‘justice’ system—one set of rules for those with the ‘right’ opinions and one set of rules for those with the ‘wrong’ ideas,” says my colleague Kara Frederick, a research fellow in the Center for Technology Policy at The Heritage Foundation and author of the new report “Combating Big Tech’s Totalitarianism: A Road Map.”

Disagree with Jensen? Speak up. Make your own video. Write an op-ed. Do a fact-check. There’s a million ways to get your view out there.

That’s how a free society is supposed to work. It’s not about quashing voices. It’s about the spirited debate. Human beings have the gift of reason; we can hear different arguments and make our own decisions about who’s right on the facts.

And yet, in a time where we increasingly use platforms like YouTube and Twitter and Facebook to communicate instead of talking face to face, those Big Tech companies are trying to control what we say.

I know the left is scared of parents like Jensen. They’re terrified by Glenn Youngkin becoming governor in Virginia, after he waged a campaign prioritizing parents over leftist educational ideologues. They’re scared that moms like Jensen, whose words get over a million views, will cause other Americans to reconsider their own views.

They’re afraid that if moms like her keep speaking up, they won’t remain in control of our schools and everything else.

So they resort to censorship.

But here at The Daily Signal, we’re still going to do journalism, no matter what YouTube tries to do to us. And, meanwhile, if you want to hear Jensen’s words yourself, check out our Daily Signal video—on Rumble.