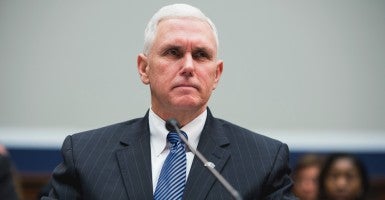 Last March, Indiana became a hot zone in the culture wars when big business and the cultural left teamed up to water down Indiana’s Religious Freedom Restoration Act (RFRA). They alleged that RFRAs lead to rampant discrimination against gays and lesbians and, in a striking example of cultural cronyism, bullied the Indiana legislature into rolling back their RFRA—despite the fact that twenty other states and the federal government have had near identical religious freedom laws on the books since as far back as 1993 without issue.

Now bakers, florists, and photographers who cannot in good conscience lend their services to same-sex wedding celebrations risk being labeled “discriminators” and fined out of business by Indiana municipalities with sexual orientation and gender identity (SOGI) laws, as has happened elsewhere in the country.

This was a policy mistake. But now Indiana legislators risk doubling down on the error after introducing three bills proposing to make SOGI policy apply statewide.

As discussed in a recent article by my colleague Ryan Anderson and Princeton Professor Robert George, Indiana’s SOGI proposals “would only increase cultural tensions, further empower an already powerful special-interest lobby, and impose unjustly on Hoosiers of many different faiths and all walks of life. All citizens should oppose unjust discrimination, but SOGI laws are not the way to do that.”

SOGI Laws Are Not Inevitable

Proponents of SOGIs with limited carve-outs argue it is better to get some religious liberty protection now as opposed to nothing later, but that presumes two things: first, that SOGI laws are inevitable and here to stay (so we had better get used to them), and second, that religious liberty protections added to SOGI bills as a “trade” are guaranteed to endure into the future.

The people of Houston showed this past November that SOGIs are not inevitable when they repealed their municipal SOGI, aka “the Houston Bathroom Bill,” by a vote of 60 percent, with strong backing by African-Americans and Hispanics.

Contrary to dire predictions of ruinous boycotts from the left, Houston did not lose next year’s Super Bowl or this year’s NCAA men’s Final Four even though the NCAA had threatened to pull the women’s Final Four out of Indiana just last year over its RFRA controversy. The people of Houston proved that the NCAA was bluffing all along (the fact that the NCAA has not canceled a single event in any state because it has a Religious Freedom Restoration Act or lacks a SOGI is also telling).

SOGI Exemptions Are Not Built to Last

Two recent examples show how even limited exemptions from bad policy can easily be removed, leaving behind only the bad policy. Years ago, the District of Columbia used its SOGI law to force a Catholic university to grant two student gay rights groups full access to its facilities and services over the university’s religious objections.

Congress responded by passing the Armstrong Amendment to protect religious schools from being required to endorse or fund organizations contrary to their beliefs about human sexuality. Just over a year ago, however, the District of Columbia’s City Council repealed this protection in its entirety.

The sponsor of the repeal effort justified the action by saying, “Discriminating against gay and lesbian people has no place in the District of Columbia.” This illustrates the dynamic that once government elevates SOGI to the same status as race in law, the “no place for discrimination” argument naturally follows.

Another example of the removal of religious liberty protections relates to Department of Housing and Urban Development (HUD) regulations that elevated SOGI to protected status in HUD assisted and insured housing. Knowing there would be objections on moral, religious, and privacy grounds from shelter operators, the regulations allowed temporary emergency shelters to retain their sex-specific policies when it came to shared sleeping areas and shared bathrooms.

The Department of Housing and Urban Development, however, is now proposing to eliminate this exemption (a mere four years after it was adopted) notwithstanding any religious objections of faith-based shelters, shelter employees, or beneficiaries living in shared shelter spaces.

The Department of Housing and Urban Development justifies dropping this narrow exemption by saying it “takes us one step closer to full acceptance of transgender men and women.” Once government elevates SOGI to the same status as race in law, the “full acceptance” argument naturally follows.

SOGI vs. the Indiana Constitution

In his State of the State address on Tuesday, Gov. Mike Pence, R-Ind., asked “whether it is necessary or even possible” to elevate SOGI and at the same time fully protect religious freedom.

The answer is no.

Mistreatment of LGBT persons—to the extent it exists in an America, where every kind of sexual identity is celebrated in Hollywood, academia, law firms, big business, music, and media—cannot be compared to the systematic state-enabled violence and degradation suffered by African-Americans in the civil rights era.

SOGI is not like race, and the SOGI laws being proposed today are in reality a solution in search of a problem.

Indeed, Governor Pence answered his own question by saying:

But remember, we are a state with a constitution. Our constitution not only protects the “right to worship Almighty God. … according to the dictates of [our] own consciences,” but, it also provides that “[n]o law shall, in any case whatever, control the free exercise and enjoyment of religious opinions, nor interfere with the rights of conscience.”

Our Supreme Court has made it clear that our constitution protects both belief and practice. As you go about your work on this and other issues, know that I will always give careful consideration to any bill you send me, but legislation must be consistent with the Indiana Constitution.

Pence said that “no one should ever fear persecution because of their deeply held religious beliefs.” But as I’ve argued above, and as Ryan Anderson has extensively documented, SOGI laws cannot help but harm religious liberty.

Because every Indiana legislator has sworn an oath to support the Indiana constitution, the question now is whether they can vote for any SOGI bill knowing they would not only create “a fear of persecution,” but also take away people’s religious freedoms in operation. Pence has placed the burden squarely on SOGI supporters to overcome Indiana’s robust constitutional guarantees of religious liberty. They have not made their case.