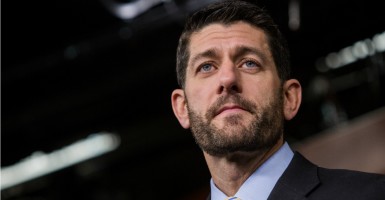 More than a trillion taxpayer dollars are on the table as House Speaker Paul Ryan and House Minority Leader Nancy Pelosi negotiate a massive spending deal.

But while those talks drag on between Pelosi, D-Calif., and Ryan, R-Wis., many House Republicans say they’re growing frustrated by the secrecy surrounding the process and the lack of details about the package.

As the days tick down toward a looming budget deadline, the chairman of the Republican Study Committee—the largest conservative caucus in Congress—said in an interview with The Daily Signal that he still doesn’t know what’s exactly on the negotiating table or what could end up in the spending bill.

“My biggest frustration is that [the negotiating process] is too opaque,” Rep. Bill Flores, R-Texas, said. “We don’t have any transparency into anything that’s happening.”

Congress will miss its Dec. 11 deadline but is expected to buy itself more time by passing a stopgap spending patch. That measure likely would give lawmakers another week to cobble together a deal.

Before the end of the year, Congress must pass a spending bill to fund the government and avoid a government shutdown. For the last month, Democrat and Republican leaders have been scrambling to hammer out that last-minute budget agreement.

Rather than passing bills to fund individual agencies and programs one at a time, Congress will approve the totality of government spending with a single vote. In recent years, Congress has made a habit of bundling smaller appropriations bills into a single lump package—known inside Washington as the omnibus.

A budget hawk, Ryan long has opposed this legislative model, recently calling it a “crap sandwich” and indicating he’d like the House to vote on appropriations bills individually in the future.

And since becoming House speaker in October, Ryan has pledged to return the legislative body to regular order as quickly as possible by re-empowering rank-and-file members and letting individual committees take the lead on all major legislation.

In line with this promise, Ryan said last week that the Appropriations Committee would be “taking the lead” and “following regular order, as much as you can with omnibus appropriations.”

Throughout November, Ryan regularly sought input from members by holding listening sessions and hosting policy conferences weekly. But as last-minute budget talks stalled, the former Budget Committee chairman took point during negotiations with Democrats in meetings that have remained secret.

A Ryan aide told The Daily Signal that the new speaker hasn’t backslid on his promise. The aide noted that while members don’t have specific details, they have more information than they would have had under the previous speaker, John Boehner of Ohio.

In September, under pressure from conservatives, Boehner announced his resignation from the speakership and from Congress, leaving Ryan with a tight budget deadline. Now, the staffer said, Ryan is doing the best he can after being dealt a “weak hand.”

“I wasn’t going to let December 11 be an arbitrary deadline that made us rush legislation,” Ryan told reporters Thursday, adding of the talks with Democrats:  “We’re trading offers, we’re talking to each other, we’re doing all the things that you would do—the appropriators and the leaders–so that we can get an agreement.”

For the most part, Rep. Matt Salmon, R-Ariz, agrees with the Ryan aide. A member of the conservative House Freedom Caucus, Salmon said Ryan is trying to simultaneously steer and repair the unwieldy ship that Boehner built.

In an interview with The Daily Signal, Salmon praised Ryan’s reform efforts but noted they would take time.

“It’s like turning the Titanic around in the Potomac: It’s not possible, you can’t take all these years of bad policy and turn it around overnight,”  he said.

Though unhappy with the process, Salmon said he understands the political context. Ryan must negotiate in secret to keep all parties in good faith—otherwise members and outside groups would gum up the works with attacks. Then, Salmon said, the process “would drag on for a couple months.”

To make it out of the House, the omnibus spending bill needs a simple majority of 218 votes. To get to that finish line, GOP leadership has tried to win over Democrats without losing too many conservatives along the way.

The current holdup likely stems from skirmishes over numerous competing priorities for tax extenders and policy riders from Democrats and Republicans.

“We’re kind of in this awkward spot because it’s hard to get 218 votes from Republicans on appropriations bills, and the Democrats know that,” Flores told The Daily Signal. “Our negotiators are uncomfortable that they’ll get 218 votes if they hold very firmly to the riders we [the Republican Study Committee] want to have in the bill.”

Rather than crafting a compromise in secret, Flores said, Ryan could use Republican muscle to outflank Democrats and move the bill on their own.  He said:

I would certainly like to see more transparency because I think we could add some real value to the process. And I think I would be willing to go out there and help get the 218 votes if we get the important riders we need.

If united, the two groups would make a formidable coalition. The ranks of the Republican Study Committee swell past 170 members. The House Freedom Caucus boasts a roster of 40 representatives, although there is some overlap in membership.

But House leadership, Flores speculated, is concerned that this approach would create a too conservative package that “they couldn’t get it through the Senate.”

This article has been modified to add the video of Ryan’s remarks to reporters and a quote from those remarks, and to more accurately describe the memberships of the Republican Study Committee and the House Freedom Caucus.