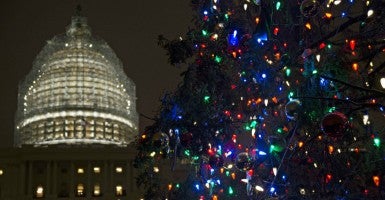 With the holiday recess around the corner, Congress takes up an annual revenue ritual. (Photo: David Kosling/ ZumaPress/ Newscom)

On Capitol Hill, the tax-extender scramble is a Christmas tradition. And now, again, just weeks before lawmakers head home for the holidays, Congress is trying to reauthorize a package of these tax provisions.

At issue are many of the tax credits and reductions that individuals and businesses unwrap come tax season in April.

Known as “tax extenders” in Washington, these provisions make up a group of about 50 tax reductions and tax breaks that expire every year. Separate from the regular tax code, they appear to be permanently temporary: Each year, Congress renews and amends the measures soon after they expire.

Rather than rubber-stamping the whole package again, lawmakers are trying to hammer out a deal with the White House to renew some while cementing others into the tax code.

>>> Commentary: What the Tax Extenders Bill Should and Shouldn’t Include

Lawmakers tried but failed at a similar effort at the end of 2014. Earlier this year, the Senate Finance Committee tried to avoid the holiday rush by moving on the issue in July. But that legislation still awaits consideration just days before lawmakers are scheduled to skip town Dec. 18.

Republican leadership is attempting to broker a bipartisan agreement among Democrats, the GOP, and the Obama administration.

The first tax extender included in President Reagan’s 1981 tax cuts, the research and experimentation tax credit, has expired and been brought back to life numerous times. It allows businesses to subtract a fixed amount from what they owe the government in taxes each year.

The so-called Section 179 credit allows businesses to deduct the cost of financed or leased equipment from their tax statements.

Republicans also are pushing for a two-year pause of the Affordable Care Act’s medical device tax.

Sen. Ron Wyden of Oregon, the senior Democrat on the Finance Committee, told The New York Times last week that he “senses a real appetite for a balanced deal” palatable to both parties.

The current bundle of tax extenders contains provisions added under every president from Reagan to Obama. So far, each tax measure has been extended at least once, and many—like the research and experimentation extender—have been renewed dozens of times.

The package up for consideration specifies more than 50 different provisions for several specific groups.

One provision allows educators to write off up to $250 from their taxes when they spend personal funds on classroom materials. Others include write-offs for owners of racehorses, NASCAR tracks, and “motorsports entertainment complexes.”

A green energy grab bag of extenders includes credits for wind and other renewable energy industries.

Reports of what tax extenders mean for the Treasury fluctuate from $500 billion to $800 billion. And some politicians regularly call for these “costs” to be “offset.”

Curtis Dubay, a research fellow in tax and economic policy at The Heritage Foundation, argues that Congressional Budget Office reports are inaccurate and based on faulty accounting assumptions. Renewing extenders does not have an effect on the federal deficit, he told The Daily Signal.

If tax extenders expire, “taxes will rise on those taxpayers who use them,” Dubay writes. “Extending them prevents a tax increase, and there is no need for Congress to offset their cost.”