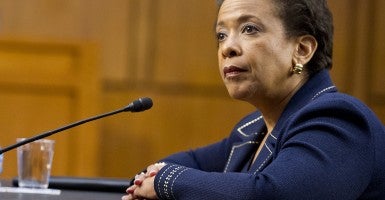 One day after launching an investigation that could delay Loretta Lynch’s confirmation to be attorney general, a Republican senator is raising more questions about her role in a money laundering settlement involving a global bank, terrorists and drug cartels.

Lynch, the U.S. attorney for the Eastern District of New York, negotiated a settlement in December 2012 with HSBC bank employees who were accused of funneling millions of dollars to terrorist organizations and Mexican drug cartels.

Her decision to let them walk away without criminal prosecution sparked inquiry from Sen. David VItter, R-La., and a host of questions Friday.

Lynch, nominated by President Obama to replace Eric Holder as attorney general, is already facing a rocky reception in the Senate, which won’t vote on her confirmation until March at the earliest.

Now, she’s being asked why she did not “immediately prosecute” bankers for allegedly shielding wealthy clients from having to pay their taxes.

“Lynch, who was in charge of the settlement, completely ignored the serious tax evasion allegations against HSBC,” said Vitter.

Vitter, a member of the Judiciary Committee, is leading the probe into Lynch’s involvement in the HSBC settlement and plans to delay her confirmation until she answers a series of questions.

“If Ms. Lynch wants to be the very top lawyer in the United States, she must explain how a simple monetary fine is severe enough punishment for a massive money laundering scheme involving Mexican drug cartels and terrorist organizations,” he said.

According to Vitter, the Justice Department had knowledge of HSBC’s shielding clients from their tax liabilities as early as April 2010.

To date, no criminal charges have been brought against HSBC for its alleged tax evasion scheme, which occurred during Lynch’s tenure as a federal prosecutor for the Eastern District of New York.

>>> Read More: Senator to Loretta Lynch: Why Did No One Go to Jail for Laundering Money to Terrorists?

Below is a copy of Vitter’s follow-up questions for the record to Lynch:

1) When did the U.S. Department of Justice receive the leaked information from French authorities detailing HSBC’s scheme to shield its clients from their tax liabilities?

2) When did you personally become aware of the HSBC leaked information detailing the tax evasion scheme?

If the media reports are correct, the U.S. Department of Justice received this information as early as 2010, yet in 2012 you negotiated a Deferred Prosecution Agreement with HSBC to avoid criminal prosecution only for the crimes of money laundering and facilitating transactions with countries sanctioned by the U.S. It has been reported that you had full prior knowledge of HSBC’s alleged earlier fraud and tax evasion violations.

3) Why did you choose not to immediately prosecute?

4) Given that HSBC admitted in the DPA to money laundering and conducting business with five countries sanctioned by the US, and given the strong evidence it also committed tax evasion, fraud and possibly other crimes, do you believe that HSBC’s “penalty” truly fits the severity of its conduct against the U.S.?

5) As has been noted, the HSBC DPA that your office negotiated while you were U.S. Attorney for the Eastern District of New York does not preclude future prosecutions for HSBC’s other criminal violations for tax evasion, fraud or for failure to meet its duties and responsibilities under the DPA, but why, nearly 5 years after the Department of Justice became aware of the tax evasion scheme, have no criminal charges been brought?

The details of HSBC Money Laundering Deferred Prosecution Agreement has hardly been made public.

6) Exactly how much did HSBC profit from the transactions, loans, accounts, etc… associated with the money-laundering accusations included in the DPA?

7) Who in your office or at the Department of Justice determined the penalty paid by HSBC and how did they come to that amount?

8) What process was used to ensure that the penalty matches the crime?

9) If the alleged identity theft took place, during the course of HSBC’s participation in a money laundering scheme, have all affected persons been notified?