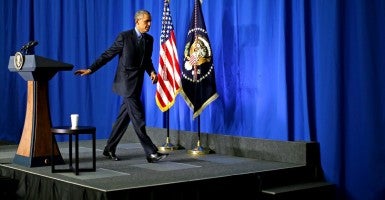 U.S. President Barack Obama leaves the stage after a news conference at the conclusion of his visit to Paris, France, Dec. 1, 2015. Obama was in Paris to attend the World Climate Change Conference 2015 (COP21). (Photo: Benoit Tessier/Reuters/Newscom)

PARIS—One week into the Paris climate change negotiations, and it’s now doubtful whether President Barack Obama will be able to make good on his promise to provide billions of dollars to the “Green Climate Fund.” The goal of this fund is to give U.S. taxpayer dollars to poorer nations in order to subsidize their climate programs.

During a press conference at the Paris Climate Conference (COP21), Todd Stern, Obama’s chief climate negotiator, was asked about congressional opposition to the Green Climate Fund. Stern could only say, “For this [budget] year we’re seeking $500 million, and I hope we can get as close to it as we can, but we don’t know yet.”

Ten Democrat U.S. senators flew over to Paris and held their own press conference, but not one of them addressed the funding issue.

This is understandable, as climate change alarmists in the White House and the Senate don’t have a good answer to the significant opposition within Congress for the climate fund. Thirty-seven Republican senators have already pledged “that Congress will not allow U.S. taxpayer dollars to go to the Green Climate Fund until the forthcoming international climate agreement is submitted to the Senate for its constitutional advice and consent.”

On the House side, 110 members have likewise pledged to block budget requests for the Green Climate Fund unless the Paris agreement is brought to Congress for its approval.

In fact, a concurrent resolution has been introduced in both chambers opposing funding the Green Climate Fund.

In fact, a concurrent resolution has been introduced in both chambers opposing funding the Green Climate Fund.

This is a significant embarrassment for the president’s negotiating team in Paris, since it is clear to all present here that the “developing” nations of the world will not agree to anything unless they are guaranteed the billions of U.S. taxpayer dollars that they have been promised.

Unlike under the terms of the 1997 Kyoto climate protocol, developing countries are now pledging to reduce their carbon emissions—but only if they are provided the financing and technology to do so. And any projects they take on to adapt to the climate change already occurring must also be underwritten by the world’s wealthy nations. So while it has become clear that Obama fully intends to bypass Congress on the Paris agreement, he has no choice but to go to Congress with his begging bowl for the billions of dollars he needs to fund the Green Climate Fund.

Given the current political climate in Washington, D.C., the world’s developing countries that are in attendance at the Paris Climate Conference should take the Obama administration’s assurances of climate funding with a very large grain of salt.