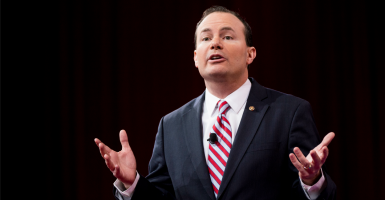 A resolution introduced by Sen. Mike Lee, R-Utah, expresses the "sense of Congress" that an international climate change deal expected to be secured by President Obama next month should be submitted to the Senate for approval. (Photo: Bill Clark/CQ Roll Call/Newscom)

Sen. Mike Lee on Thursday introduced a resolution “expressing the sense of Congress” that President Barack Obama should submit an international climate deal expected to be struck in Paris next month to the Senate for its approval.

The measure was filed as a “concurrent resolution,” meaning it represents the views of both chambers of Congress, but is non-binding, so it does not function as a law or require approval of the president.

Indeed, the resolution is meant more as a messaging vehicle to pressure Obama to submit the climate deal as a treaty. The House and Senate must both pass the resolution.

“If I was a senator, I would be outraged because we are starting to see as a people, not just in this legislative body, that this is a president who acts like more of a monarch than we’ve ever had,” Kelly told The Daily Signal in an exclusive interview.

“This executive branch needs to know we don’t care what they say over french pastries and a cup of coffee. This agreement has absolutely no meaning for the American people if it does not have the Senate’s advice and consent. That’s not American and not the way we work, and we won’t fork it over to him because it’s his last months in a horrible, horrible presidency.”

To avoid the objection of congressional Republicans, the Obama administration has indicated it plans to negotiate the deal in a way where it would not be submitted to Congress as a legally binding treaty, which must be approved by two-thirds of the Senate.

According to a report in the New York Times, the Obama administration will argue that the agreement can be produced as an executive agreement, and not a treaty, because it is already legally protected under a 1992 United Nations climate change treaty.

Under the plan reported by the Times, the U.S. and other countries would be legally required to certify that they will enact climate change policies, but would only voluntarily commit to a specific level of emissions cuts.

The 1992 treaty, called the United Nations Framework Convention on Climate Change, was signed by President George H.W. Bush and ratified by the Senate. Its objective is to “stabilize” greenhouse gas emissions, but it does not set emissions limits or timetables on individual countries.

Lee and other Republican critics argue that Bush and the then-Democratically controlled Senate committed to the 1992 treaty with the understanding that future agreements containing timetables and/or targets would be submitted to Congress.

“Any agreement adopted containing targets and timetables, whether deemed legally binding or not, must be submitted to the Senate for advice and consent,” Lee’s resolution reads.

The resolution also says Congress should refuse to authorize funding that would help other, less developed countries implement their climate plans.

Republicans have blocked efforts to appropriate the money.

“Congress should refuse to consider any budget resolutions and appropriations language that include funding for the Green Climate Fund or any affiliated body or financial mechanism unless and until all agreements on emissions targets and timetables are submitted to the Senate for advice and consent,” the resolution concludes.

This story has been updated to include a quote by Rep. Mike Kelly, R-Pa.