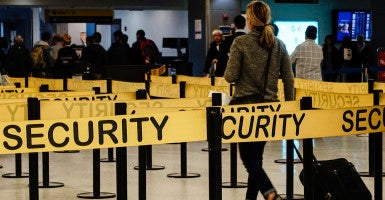 Passengers make their way in a security checkpoint at the International JFK airport. (Photo: Eduardo Munoz/Reuters/Newscom)

After the rage and mourning over the Paris terrorist attacks came fears of another Paris—in another city.

Nowhere has the debate about how to keep terrorists “over there” from coming over here been waged more vigorously than in the United States. That comes as no surprise. Few doubt that America is on the ISIS hit list.

The good news is that the U.S. has a lot of experience at interdicting terrorist travel. Washington ought to make better use of what it already knows works.

The 9/11 Commission Report on the terrorist attacks on New York and Washington became an international bestseller. Far less known (and just as important) was a monograph on transnational terrorist travel prepared by the commission staff. Investigators poured over everything the law enforcement and intelligence community knew about how transnational terrorists—including the 9/11 hijackers—traveled to the United States.

Their conclusion was instructive. In short, if there is a way to come to America, some terrorist has tried. Most prevalent, however, was the use of legal travel entering through an established port of entry.

Since traveling terrorists represent an infinitesimal amount of the tens of millions of foreigners entering the United States each year, it makes little sense to restrict or fixate on any particular method of international travel. Rather, the rule ought to be ensuring due-diligence, establishing responsible travel policies.

That is generally the strategy the United States followed since 9/11. The government, for example, negotiated international agreements on sharing passenger name records (PNR) so the information would be responsibly available to screen flight and ship manifests for individuals on terrorist watch lists.

In another example of sound due diligence, the Bush administration revamped the Visa Waiver Program, adding features that both enhanced security and facilitated travel for some 20 million foreigners who visit the United States each year as tourists or on business. The dual achievement became a model for other post-9/11 travel initiatives.

The Paris attacks have prompted calls to rethink international travel security. It is worth asking: What has changed, and what should be done?

If anything, the terrorist threat facing the United States is even greater than it was on 9/11. At least 74 known terrorist plots aimed at the homeland since then. The threat remains as diverse as ever, with an increasing number of plots being “homegrown”—organized and undertaken by individuals who became radicalized in the United States.

Further, the number of individuals involved in terrorist acts in the United States remains small.

These trends argue for sticking with due diligence in travel policies, both those governing legal (immigrant and non-immigrant) entry into the United States and those governing border security practices. Naturally, due diligence also must be applied in policies for screening and accepting refugees.

What definitively ought to be avoided is adding “feel-good” security measures—strictures that needlessly require government to spend more time and money doing things that make life more difficult for innocent travelers but don’t really help restrict terrorist travel at all.

The Feinstein-Flake bill messing with the Visa Waiver Program is a great example of “feel-good” security. The bill would require Europeans who have visited Iraq or Syria to get a visa before entering the U.S. That makes no sense. The Electronic System for Travel Authorization already screens Europeans for traveling in such places when they apply to come to the U.S. The bill adds a needless and costly redundancy.

What we need from Washington are sensible actions, not senseless posturing.