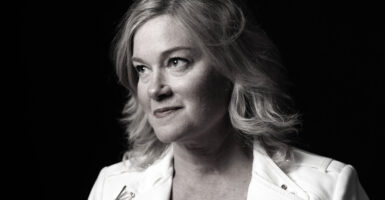 The annual March for Life is set to take place January in Washington, D.C., on the 50th anniversary of the monumental 1973 Supreme Court decision in Roe v. Wade. And while some have suggested that pro-life activists should focus on state-level efforts, March for Life President Jeanne Mancini is calling on pro-life Americans to “fearlessly continue marching.”

This will be the first such march since the Supreme Court overturned Roe v. Wade in June, saving the lives of over 10,000 babies, by some estimates—and prompting criminals across the nation to attack and vandalize scores of pro-life pregnancy resource centers. The attackers graffitied many of the pregnancy centers with phrases such as “If abortions aren’t safe, then neither are you.”

Mancini emphasized to The Daily Signal that the March for Life prioritizes the safety of “the hundreds of thousands of marchers” who have previously braved everything from fears following the 9/11 attacks to blizzards and other inclement winter weather as they cross the country each January.

“Abortion is expected to take well over 700,000 lives nationwide in the coming year,” she said. “Even though the overturning of Roe v. Wade is an enormous victory for the pro-life movement, we have a duty to fearlessly continue marching because our work as the largest and longest-running human rights march nationwide is far from finished.”

“We will continue to courageously and joyfully march until the grave injustice of abortion is unthinkable, and every life is valued and protected,” Mancini added. “I can’t think of a worthier cause.”

In November, Catholic Cardinal Wilton Gregory of the Archdiocese of Washington canceled the 2023 Youth Rally and Mass for Life, a massive event held for the past 25 years that typically draws about 20,000 young people from across the U.S.

The archdiocese’s statement on the matter, which noted that it will also not host the larger multi-diocese rally, offered little explanation other than that “many dioceses” are focused on state-level efforts to combat abortion.

But the decision is likely to impact the numbers since many Catholic dioceses are responsible for sending busloads of cheerful pro-life families to join the march. And it’s unclear why Gregory would make such a move.

The archbishop, who did not respond to a request for comment, has previously said that he would not deny Communion to Catholic, pro-abortion President Joe Biden and came under fire last year for avoiding addressing whether he would “bring down the hammer” on Catholic pro-abortion House Speaker Nancy Pelosi.

“I must protest this cancellation,” Bishop Joseph Strickland of Tyler, Texas, said in November of the cancellation of the youth rally. “We have an extremely anti-life President & we cancel our national voice? Yes to state efforts, but we desperately need a national voice for life at this critical time.”

In response to the cancellation, the Sisters of Life and the Knights of Columbus announced in December that they will be hosting a new morning rally on the day of the March for Life at the Entertainment & SportsArena in Washington D.C. Life Fest will include speakers, a Catholic Mass, and Eucharistic adoration.

“We know that Jesus holds all things in His hands,” she added, regarding the attacks on pro-life centers. “We pray for peace in this nation, for healing, true dialogue, and solidarity. We know, and see all the time in our missions, that perfect love casts out fear. We place all our trust in Jesus’ love and mercy.”

Sister Maris Stella described the upcoming march as “one of the most crucial” in the history of the pro-life movement.

“In the wake of the recent Dobbs decision, we see a profound opportunity to build the culture of life in a new way,” the sister said. “We want to serve the Church in her most urgent need—that of the cause of human life, sharing the good news of God’s plan for life and love. So, let’s return to the heart of the matter. Let’s renew our commitment to love. Let’s be agents of healing in a broken world.”