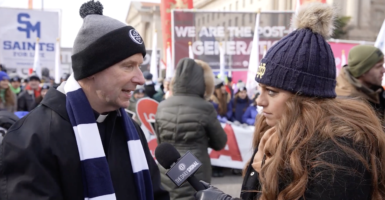 Bishop Michael Burbidge of Arlington said Friday that the pro-abortion Catholics for Choice group’s projection of a pro-abortion slogan on the Basilica of the National Shrine of the Immaculate Conception was “chilling.”

The bishop discussed the incident with The Daily Signal Friday afternoon at the 49th annual March for Life in Washington, D.C.

“It was chilling to hear that kind of behavior would be conducted,” he said. “But in my homily at Mass this morning, I spoke about that. I said, we have the truth, we can march peacefully and joyfully, but there are other evil forces who will try to disregard, to discredit us. And they will not do so in ways that are proper.”

Projecting the pro-abortion slogans was completely “unacceptable,” Burbidge told The Daily Signal, adding that it reminds the faithful “of the evil forces that are out there and why a March for Life in such a peaceful, joyful way is so necessary.”

“The true voice of the Church was only to be found within The Basilica of the National Shrine of the Immaculate Conception last evening,” he said. “There, people prayed and offered the Eucharist asking God to restore a true reverence for all human life. Those whose antics projected words on the outside of the church building demonstrated by those pranks that they really are external to the Church and they did so at night.”

Burbidge also discussed how schools in the Diocese of Arlington would operate regarding masks for children in light of Virginia Gov. Glenn Youngkin’s new executive order.