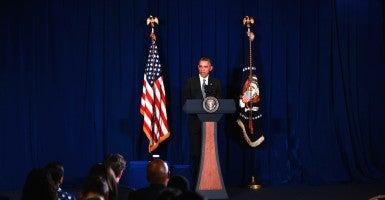 There is a reason President Obama’s poll numbers for stuff like fighting terrorism are falling faster than the thermometer.

By most objective measures, the president has been a poor steward of our national security, and Americans are arguably less safe today than when Obama took office.

The number and frequency of Islamist related terror plots aimed at the U.S. homeland are on the rise. Meanwhile, the U.S. has a greater challenge in managing threats in key regions including Asia, Europe, and the Middle East, while the capacity of the U.S. military to deal with them continues to slip.

It is true that the Oval Office can’t be held responsible for all the bad news. Still, there is a case to be made that the White House must shoulder part of the blame. The Obama Doctrine has never worked very well.

There is, however, still some good news. Since the president as both commander and diplomat-in-chief bears much of the burden for making and implementing foreign and defense policy, fixing it ought to be within a new executive’s grasp. But this will depend on the energy, initiative, and wisdom of the next holder of the White House to set a better course.

Tracking closely all the ways the White House has gone wrong over the years also offers a guide in how to set things right.

When Obama came into office, his policies looked like “Bush lite.” He perpetuated many of the same policies, though he offered very different rhetoric on how he would keep American safe, free, and prosperous.

In 2010, however, the president started putting his own stamp on foreign policy.

For starters, the White House initiated its own counterterrorism strategy that called for greatly reducing the scope of U.S. operations. In turn, the administration created opportunities for the global Islamist insurgency to bounce back in the Middle East and North Africa. Groups like ISIS and al-Qaeda and their affiliates have taken advantage.

What is needed instead is a plan, such as the one proposed by analysts at The Heritage Foundation to “regain the initiative that has been lost by this president, bring a successful end to the long war, and leave behind an enduring and sustainable counterterrorism enterprise—one that can adeptly respond to future emerging threats.”

The White House has done an equally poor job fighting the war of ideas against the radical ideology of Islamism.

The administration refuses to even name an enemy beyond the vague term of “violent extremism.” What is needed instead is a clear and confident strategy to battle a totalitarian ideology.

Heritage analysts laid out this course last year and concluded that “given the different national contexts and stages along the democratic development spectrum on which each country finds itself, there is no one-size-fits-all strategy for the U.S. to pursue.”

There are concrete steps that Washington can take to counter and delegitimize the hateful message and political influence of Islamist ideology in key strategic areas around the world.

Beyond the global Islamist insurgency, there are significant threats to vital U.S. interests that the next president will need to promptly address to reverse the decline of American power.

Here’s a simple to-do list for our next administration (an expanded version here).

This plan calls for a revitalized counterterrorism effort, a winning way to win the war of ideas, and a comprehensive approach to protecting American vital interests. It’s vital for the next occupant of 1600 Pennsylvania Ave. to have the tools necessary to deliver on his or her constitutional obligation to protect Americans (in an increasingly uncertain age).