This Top Democrat Vows to Push New Gun Controls in 2016 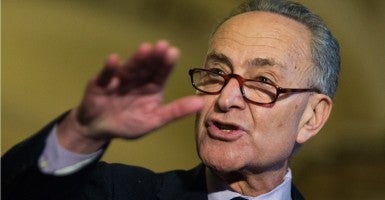 One of the Senate’s top Democrats has promised to renew a push to pass sweeping gun control legislation in 2016.

At an event sponsored by the Brady Center to Prevent Gun Violence, Sen. Chuck Schumer, D-N.Y., announced that Senate Democrats will “bring a universal background check bill to the floor of the Senate early next year.”

The legislation and the center are named after James Brady, President Reagan’s first press secretary, who was gravely wounded in the 1981 assassination attempt on Reagan.

After being honored for his work Friday, Schumer said the Brady gun bill “was step one” but urged Democrats to close ranks and “finish the job.”

“The Brady bill proved—proved—that we could do something in this country to make our communities and neighborhoods safer,” Schumer told the audience. “If we could do it then, we can do it now.”

But when Schumer rallied his party behind the Brady bill in 1993, Democrats controlled both the House and the Senate.

Today, Republicans who are pro-gun rights hold majorities in both houses of Congress, making new restrictions on the purchase of firearms almost impossible.

That legislation, the Manchin-Toomey bill, would have required almost universal background checks on all gun sales. The bill failed, falling six votes shy of reaching the filibuster-proof threshold of 60 votes.

Now, Democrats would need to unite, vote as a bloc, and convince 14 Republicans to switch sides to pass a bill out of the Republican-controlled upper chamber.

Already one Senate Democrat has told The Daily Signal she plans to oppose the legislation.

“I have made clear where I stand on background checks legislation, and that hasn’t changed,” Sen. Heidi Heitkamp, D-N.D., said last month. “As a result, I can’t support this proposal.”

In the House, gun control faces an even steeper challenge. Speaker Paul Ryan, R-Wis., has said he is more interested in enforcing existing laws and passing mental health legislation.

In an unaired segment of a “60 Minutes” interview on CBS, Ryan said he hasn’t thought of proposing new gun legislation. “I think the big problem we have is enforcing the law as we have [it] on the books right now,” he said.