Obama’s Education Secretary: ‘Our Nation Values Our Guns More Than We Value Our Kids’ 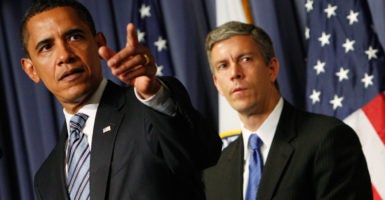 President Barack Obama’s first education secretary, Arne Duncan, spoke exclusively to The Daily Signal’s Rob Bluey at the Reagan Institute Summit on Education on Thursday. Duncan joined three other former education secretaries on stage at the event, where he said the Obama administration’s failure to enact gun control was one of his biggest regrets. He also addressed criticism of changes he advocated to school discipline practices while education secretary. A transcript of his Daily Signal interview is below.

Rob Bluey: What’s your reaction to the nation’s report card, which came out this week? The scores have largely stagnated with the exception of Florida, which made gains.

Arne Duncan: Right now, our nation lacks clear goals. And I don’t see any leadership coming from the current administration.

We can have lots of vigorous, we should have lots of vigorous debate, about the best strategies to achieve those goals. But I would love our nation to come together behind a couple, what I think, basic—not left, not right—goals of making sure that children have access to high quality pre-K, so they enter kindergarten ready to be successful.

We want to see those high school graduates truly be college and career ready. And then, I think our goal as a nation should be the highest college completion rate in the world. That’s the kind of big leadership and vision that I think is desperately lacking right now.

Bluey: You said from the stage today that one of your regrets is not doing more on gun control. What, specifically, did you have in mind that you would have like to have accomplished?

Bluey: Are there federal measures that you wish were enacted?

Duncan: Absolutely. Basically, every other civilized country on the planet has done this. And whether it’s England or Australia or Japan or Canada, there are multitude of examples.

This is not intellectually difficult. This is not finding a cure for cancer. This is absolutely just a lack of political will and courage.

Our nation values our guns more than we value our kids. And our kids are paying a real price for that.

Our kids are saying that we’ve had enough, and we’re not going to tolerate any more. They’ve given me tremendous hope.

I came to the March for Our Lives in Washington with my family. Kids I’m working with in Chicago spent time with the kids in Parkland. Kids in Parkland come to visit us, and it’s a pretty amazingly powerful coalition that they’re building. I think they’re going to lead the country to where we adults have failed to take the nation, which is to a much safer place.

Bluey: One of the things that the Obama administration did was institute a school discipline policy that has come under criticism from President Trump and others. What’s your reaction to those who are now saying that this is a reason to blame for Nikolas Cruz’s actions in Parkland?

Bluey: What consequences would there be if the Trump administration revoked it?

Duncan: I think the current administration has not had any clear agenda other than trying to undo things that we did. So, unfortunately, that will probably happen. And that will have negative consequences for kids and for the country.

Bluey: You invited Broward County to participate in a White House event as a model example. What went wrong there in terms of why this student was not stopped by law enforcement?

Duncan: It’s not about one shooting. What was wrong with our country is that we have an access to guns everywhere, not just in schools. In movie theaters, in our churches, on our ball fields, where congressmen play baseball. We have an easy access and availability to guns that has lethal consequences. That’s the problem.

Bluey: Do you think there’s an opportunity for Republicans and Democrats, conservatives and liberals, to get together to talk more broadly about school safety, even if guns aren’t the issue?

Duncan: That’s a fine conversation to have. I think there are actually much more important conversations to have. This is about our society’s safety, not about school safety.