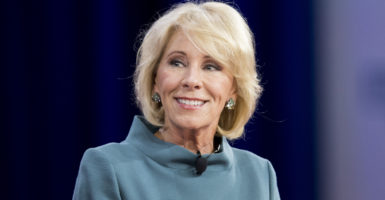 "The last thing we want to see is another mandate from the federal level," Education Secretary Betsy DeVos says. (Photo: Michael Brochstein/ZUMA Press/Newscom)

Education Secretary Betsy DeVos spoke exclusively to The Daily Signal’s Rob Bluey for an on-camera interview at the Reagan Institute Summit on Education on Thursday. This week, the Department of Education released what’s known as the “nation’s report card.” DeVos addressed its disappointing results and how the Trump administration is pursuing reforms to improve education in America. The full video and an edited transcript of the interview is below.

Rob Bluey: Thirty-five years ago, the Reagan administration issued its “A Nation at Risk” report. Here we are 35 years later, and just this week you said, “We can and we must do better for America’s students.” How are you and President Trump going about doing that?

Betsy DeVos: Let’s look at the reality. With the [National Assessment of Educational Progress] results that just came out this week, we look at the historical patterns. And while there’s been minimal gains in the results, the reality is that, all of the results have been unremarkable over these years, since the NAEP has been administered.

I would argue that we are indeed a nation still at risk. In fact, I think we’re at greater risk today even than 35 years ago. When we look at how the world around us has changed, how technology has advanced in so many different sectors of society, and yet with education, our students just are simply not being prepared as a rule.

DeVos: I think we have had constant efforts at the national level to introduce and interject more opportunities for parents to make decisions that are best for their children. We’ve also tried to regulate and mandate a lot of things from the federal level. We have invested billions and billions and billions of dollars to try to focus on the lowest-performing schools, and the lowest-income students. And yet the results for those students continue to, in most cases, decline.

There’s one bright spot, and that bright spot across the board is Florida. And Florida has taken this issue seriously for a number of years now, and made systemic changes in the … early 2000s to really look holistically at how they were approaching education.

All of the reforms implemented in Florida have come together to really change the results. So we see results improving in Florida for those at the top end of the performance spectrum, as well as those importantly on the bottom end.

When we look at some of the reforms—being merit pay for teachers, accountability, A-F grading systems, giving transparency to parents to understand how their child’s school is doing on behalf of its students. And importantly, offering a range of choices to parents from lower incomes, or children with special needs.

DeVos: I think some of the opportunity comes through the Every Student Succeeds legislation, which gives a great deal more flexibility back to the states.

We need to see states actually take that flexibility, and translate it, and transfer it down to the local level—to the school building level. To let them try new things, and different things. To really encourage all schools to rethink how they’re approaching education for the students that they’re serving. We need to see a lot more creativity at the school building level.

Bluey: One of the other things that came out in the report card was the widening gap between high performers and low performers. What are some of the things that concern you most about that widening gap? And what can be done, again, to perhaps close and narrow it?

DeVos: Everybody wants students to do well, but the reality is, everything that’s been done at the federal level that has focused on trying to help those who are at the bottom end of the performance ladder, those results just haven’t happened.

“We need to see states actually take that flexibility, and translate it, and transfer it down to the local level.” —@BetsyDeVosED

It’s only been in states where they are actually taking student-centered approaches to reforms very seriously, and very intentionally, that we are seeing some of those gaps closing.

And I refer back to Florida. When Florida started their reforms, they were 47th, 48th, and 49th on the NAEP scores. Today, in fourth grade math and reading, in reading they’re fifth in the country, and eighth in math. So it is indisputable that the reforms that they’ve undertaken there have made a significant difference for the students.

Bluey: Conservatives point to states and local control over education as being a priority. As you travel the country and meet with people who are involved in the education world, what is your message to them?

DeVos: My message is to really take seriously the opportunity they have to impact at their local level. Really advocate with their state legislatures, with their governors, and change policy to focus on student-centered approaches to education.

Bluey: My colleague Lindsey Burke at The Heritage Foundation wrote about the nation’s report card this week for The Daily Signal, and she noted that since the 1960s under President Lyndon Baines Johnson, all the way through today, the federal government has spent more than $2 trillion on education. You said billions and billions. This money that’s going into the system is obviously not producing the types of results. How can that be better spent?

DeVos: I think it can be better spent if parents are empowered to make those decisions. And we are advocating broadly, we’ll soon have a more specific proposal that would compliment what states are doing.

“The last thing we want to see is another mandate from the federal level.” —@BetsyDeVosED

The last thing we want to see is another mandate from the federal level, and another program to be administered here, because we only know that it gets more and more cumbersome, and more and more burdensome. But we want to ensure that whatever is done at the federal level is really empowering parents at the local level, and broadly states to make the changes that they need to do to meet students’ needs.

Bluey: Is there a role for Congress to play here? I know that you’ve had some lawmakers like Congressman Mark Walker this week came out and said the nation’s report card is a reason that we should look to the A-PLUS legislation. There are other lawmakers who have other solutions. Do you see any of those proposals making the types of changes that could have a meaningful impact?

DeVos: I really think that given the history of federal initiatives and legislation, we will be best served when we return and encourage the flexibility to happen at the local level, and at the state level. And 90 percent of the funding for education comes from states, and yet the federal government has played an outsized role in trying to make changes.

We’ve seen now in the past, 25, 35 years with the “Nation at Risk” report, we’ve seen that those efforts to really focus on those who are at the bottom end of the economic ladder, and the bottom end of the ladder in terms of school performance. All of the funds trained in that direction have not made a meaningful difference. All of the results bear that out in the NAEP results this week.

Bluey: You’ve had the opportunity now to serve with President Trump for the past year. Can you talk about his commitment to education, and some of the things that he passionately believes in for our nation’s students?

“We need to have a lot more creativity, and we need to empower people at the local level.” —@BetsyDeVosED

DeVos: The fact that he has advocated for parents to be able to make the choices that many higher income parents have been able to make for their students, that has been so consistent with all the work that I’ve done over the years.

He has a commitment to helping ensure that people are empowered, parents are empowered to make sure that their students have the kinds of options that others have.

Bluey: And as you look back on your first year, and also looking ahead, how do you want to be remembered as education secretary?

DeVos: I hope that we’ll ultimately be remembered as an administration that has really encouraged everyone to rethink education. Because the way that we’ve done it for over 100 years, and largely do it the same today, is not working for way too many students.

We need to have a lot more creativity, and we need to empower people at the local level. Teachers in buildings. Good effective leadership in buildings, but importantly parents to make the right decisions for their kids.

Bluey: Secretary DeVos, thanks so much for spending time with The Daily Signal.

DeVos: It’s my pleasure. Thanks for having me.